Artist Edith Lake Wilkinson (1868-1957) may sound familiar because I wrote about her for my earlier AWA blog in August 2021. She was one of the group of women artists who lived and carved prints in the art colony of Provincetown, Massachusetts on Cape Cod. These artists had fled Europe before the beginning of World War I.

The atmosphere in this art colony recalled the camaraderie characteristic of Europe—especially Paris, and within this milieu a new and easier method of creating a white-line color print was simultaneously developed within a few months. Artist B.J.O Nordfeldt (1878-1955) is generally credited with developing the method but one can never know the exact answer as new research has revealed that this invention was more of a “group effort.” The new method provided an innovative way of printing a wood block that revolutionized the time-consuming methods that had been used to carve woodblock prints through the 18th century. This new technique used only one woodblock on which an image was carved with a single gouged line separating individual parts of the overall image.   This concave line separated the image into parts and prevented a color, mostly watercolor or gouache, from running into another when applied. The artist could also see the overall image on a single wood block as it was printed. No longer were wood printmakers required to spend months creating single wood blocks for each color that had to be carefully registered on the paper.  This revolution came to be known as the Provincetown White-Line Color Print. Ada Gilmore described the breakthrough this way: “One day [Nordfeldt] surprised the others by exhibiting one block . . . with his complete design on that, instead of parts of it being cut on five or six blocks.”1 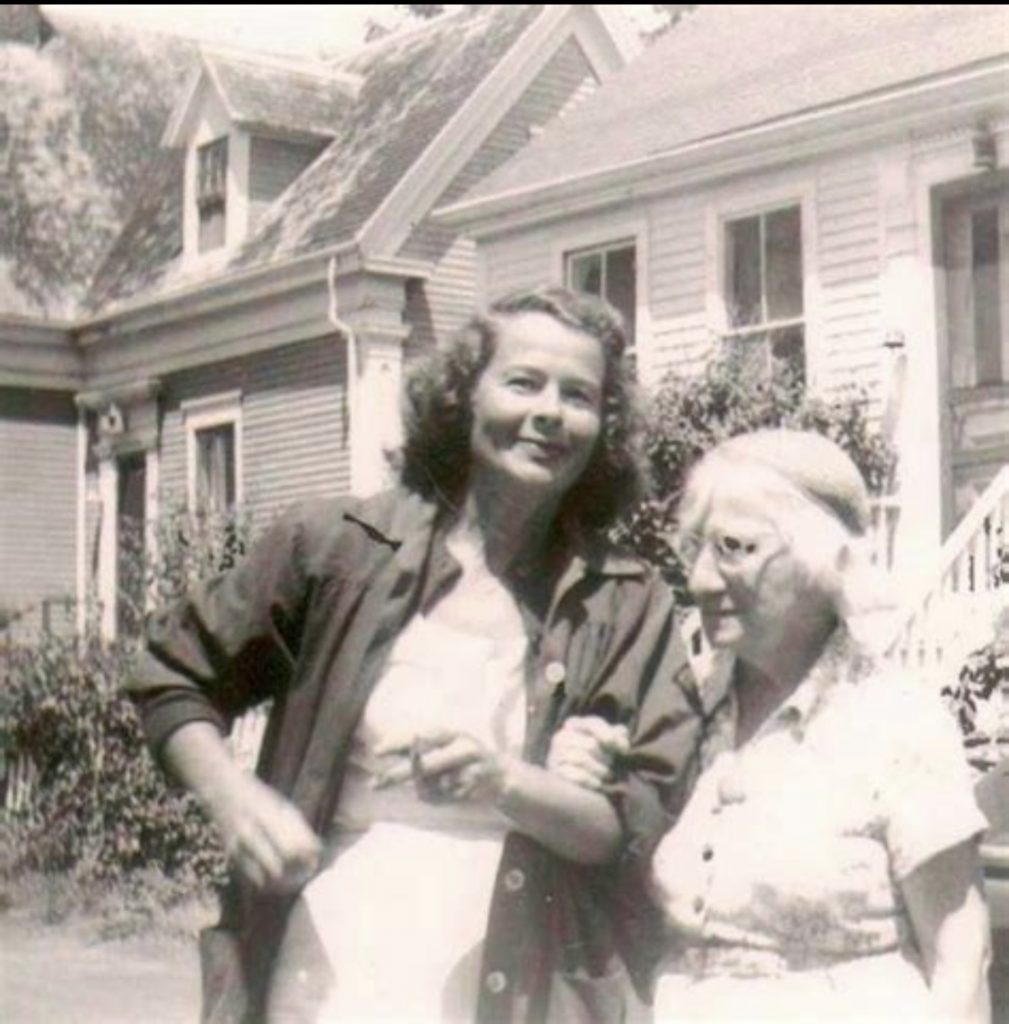 The most noteworthy woman artist and best-known today is Blanche Lazzell (1878-1956), a native of West Virginia who had spent the previous two years in France, before first coming to Provincetown in 1914.  She came to study with Charles Hawthorne who taught at his own Cape Cod School of Art.  But over the winter of 1915/16 several women artists including Ethel Mars, Maud Squire, Mildred “Dolly” McMillen, Ada Gilmore and others began to perfect this single-block method while realizing that there was a ready summer market for these softly-modulated, colorful prints that depicted Provincetown’s painterly seaport.

Lazzell returned to Provincetown during the summer of 1916 and Oliver Newberry Chaffee, who had been influenced by European modernism, taught her the white-line print method. Quickly, Lazzell became the leader among the white-line printmakers working from her studio in an aged fish shack on the wharf where she not only sold her prints which hung on her studio walls, but also taught the method to those interested.  Lazzell kept copious notes in a ledger recording the print impression with date and to whom it was sold.  These journals also recorded the visitors and purchasers who came to her studio. Lazzell had rented this studio, later updated in 1926, at 351 Commercial Street, the main thoroughfare through the Portuguese village.  This shed studio was her home for over forty years and extended into the tidelands with a deck on which she famously grew overflowing flowers, hollyhocks and roses, and potted plants. Unfortunately, a developer demolished her studio with no regard to her legacy or the history of the Provincetown Print during off-season in early 2002.2   At the time of this destruction, two major art exhibitions were to open showcasing Lazzell’s work at the Provincetown Art Museum and a larger one at The Museum of Fine Arts in Boston. With a wider audience, these exhibitions introduced her stunningly beautiful modern prints to a contemporary public.

By 1919 the Provincetown Print had begun to receive attention and the Detroit Institute of Arts was the first to offer a major show featuring color white-line prints by American artists. A foreword to the catalogue by Clyde H. Burroughs [Curator of Art] called the genre “. . . a beautiful medium to which the true artist responds with the best that is in him.”  He described how Lazzell and others created the prints: “The composition must of necessity be simple.  There must be a good deal of elimination in drawing. A few tones . . . to convey . . . gradation of color and values.  It is important for him to know what to leave out and what to put in. It develops in him a rare facility of design.” 3 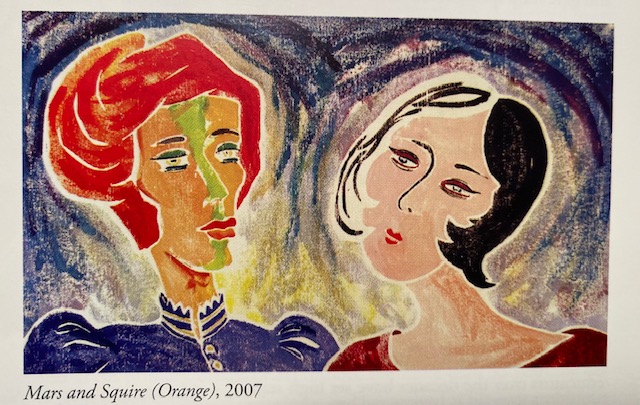 Ethel Mars and Maud Squire are often considered together as they were lifelong companions.  Described in Paris by a contemporary artist friend: “They were nice Middle Western girls . . . with a certain primness [1906] . . .  but dramatically transformed themselves in Paris. Miss Mars had acquired flaming orange hair and both were powdered and rouged with black around the eyes until you could scarcely tell whether you looked at a face or a mask…” 5  The two traveled in Gertrude Stein’s circle, attended her salons with Picasso and Matisse, and Stein wrote a profile of the pair titled Miss Furr and Miss Skeene.

Mars created white-line prints in Provincetown with strong color emphasis depicting interiors of women at work, influenced by Bonnard, Vuillard, and even the woodcuts of Kandinsky. 6   An illustrator, Squire learned the print technique later with subject matter largely focused on Provincetown fishermen.  After the end of World War I, Mars and Squire returned to Europe to live in the south of France and became active in the Vence art colony. 7

Another curious story within the printmakers group was the triumvirate of Agnes Weinrich (1873-1946), and her sister, Helen Weinrich. The Iowa sisters studied extensively in Europe before coming to Provincetown in 1914. Weinrich soon joined the Nordfeldt group of artists and emerged as the leading modernist and avant-garde advocate among them.  In 1922, sister Helen, a musician, married Karl Knaths (1891-1971) a nationally successful artist living in the village and fifteen years her junior. The three lived domestically together in a house that Knaths built at the tip of Cape Cod in the western most point of the village on property that the sisters had purchased. Helen maintained the house responsibilities and Karl and Agnes carried out their artistic pursuits.  Knaths acknowledged that Agnes introduced him to modernism and the two worked closely together. . .  “At first, she was teacher and then our relationship became cooperative and we learned from each other.” 8 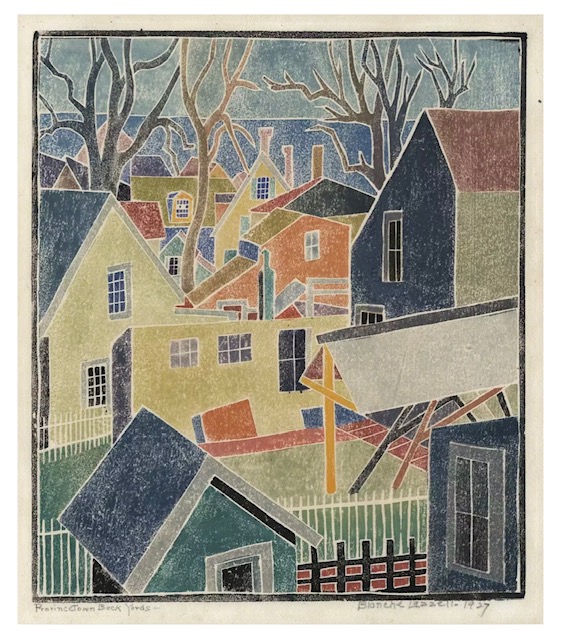 The list of Provincetown printmakers is longer than one would expect as the genre was taught in Provincetown and spread across the country as some of these artists moved elsewhere.  Other women printmakers were Dorothy Loeb, Juliette Nichols, Ethel Boies Hopkins, Mary Mullineux, Wuanita Smith, Cora Boone, Mary Tannahill, Mabel Hewit, Grace Martin Taylor, a relative of Lazzell’s, and later, Ferol Sibley Warthen, among others. Edith Lake Wilkinson was a member of the Provincetown Printmakers, as well.

William Evaul, a practicing white-line printmaker in Provincetown and Fred Dylla, a retired nuclear physicist, are today keeping this color white-line print alive by teaching students the method and currently co-authoring two volumes on the history of the Provincetown Print and its practice and methodology.

Blanche Lazzell poetically captured in words the picturesque locale in which the Provincetown Print evolved:

‘Up along’ and ‘down along’ Commercial Street the gayly colored throng constantly moved. The artist with paint box, canvas, and easel, the writers, the musicians, the actors, professors, the staid New England natives, the old Portuguese women with shawls over their heads, the Portuguese fisherman just home from their long fishing trips or from morning traps, the joyous youngsters, the crews from the battleships in the harbor, all elbowed one another good-humoredly on the narrow sidewalks of Commercial Street. Creative energy was in the air we breathed. It was in this quaint setting that the Provincetown Print came into being. 9 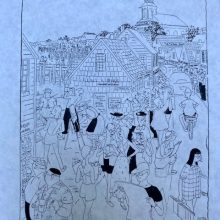 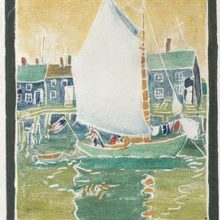 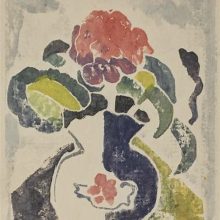 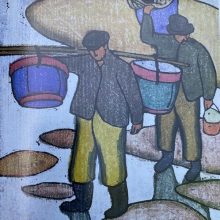 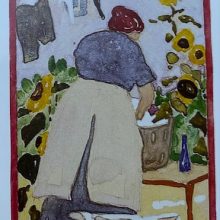 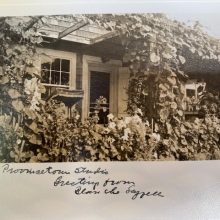 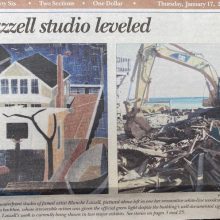 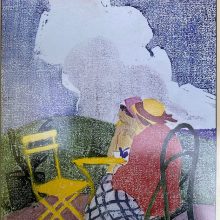