The Huntington Women – Arabella and Anna

Archer and Anna Hyatt Huntington first came to my attention when I was doing research on Delaware artists Orville and Ethel Peets.  After World War I, the Peetses traveled in Spain and Portugal painting the Spanish culture for The Hispanic Society of America, founded by Archer Milton Huntington in NY in 1904.  The Peetses later visited the Huntingtons at Atalaya Castle in the South Carolina Low Country in the 1930s. 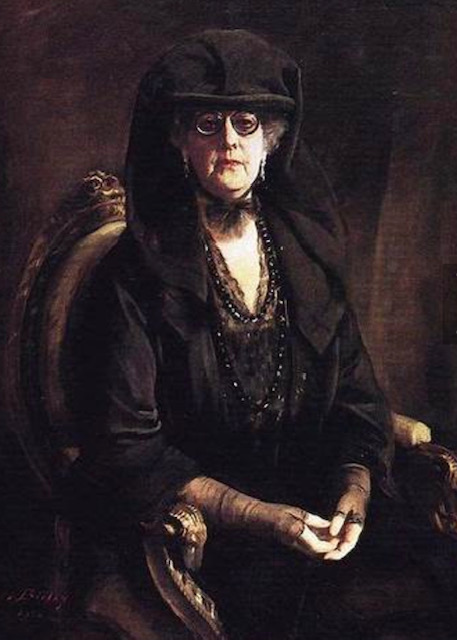 The story of the Huntington family looms large in 20th century American philanthropy and cultural history.  Collis Potter Huntington (1821-1900) was born in Connecticut and with three other men of soon-to-be great wealth, built the transcontinental railroad to California.  He is characterized as a disliked man who always saw ‘financial opportunity’. His second wife who had cared for his ailing first wife in NY, Arabella Duval Huntington (1851-1924) became the wealthiest woman in America after Collis Huntington’s death.  With this money Arabella furnished houses and estates in San Francisco, the US Adirondacks, Paris and a mansion in New York.  The famous gallerist, Joseph Duveen, the purveyor of European Old Masters and 18th century French furniture to many of the self-made American magnates like Widener, Morgan, Vanderbilt, and Mellon, had opened his gallery just down the street and he became the willing progenitor of the great collections that the Huntington family amassed.

Arabella’s story does not end here. When Collis died in 1900, his nephew, Henry Edward Huntington (1850-1927) inherited one third of his uncle’s estate and divorced his wife in order to marry Arabella who brought a 14-year-old son, Archer, to the marriage.  Henry adopted Archer and it is speculated in several sources that Archer was his biological son. 1 (wiki) Henry and Arabella focused their wealth and philanthropy in Los Angeles and created the Huntington Library, Art Collection and Gardens in San Marino.  Henry grew his wealth by introducing electric street cars that connected the suburbs to LA.  The couple’s collecting appetite continued and they spent $21 million on fine art from 1908-1917 including a Rembrandt, a Velasquez, and Gainsborough’s famous The Blue Boy, for $728,000, all at the eager door of Joseph Duveen. 2

Son, Archer Milton Huntington (1870-1955) inherited not only his mother’s wealth but her passion for collecting and he became a Hispanist expert, poet, world traveler and founder of The Hispanic Society of America in 1904 in New York. Mother Arabella bought a Velasquez for her son and gifted it to The Hispanic Society of America.   Archer’s personal passion was translating Spanish poetry and having met the great Spanish painter, Jaoquín Sorolla, in England in 1908, he commissioned him to paint fourteen murals in Society’s headquarters in New York.

Archer Huntington married an already accomplished sculptor, Anna Hyatt Huntington (1876-1973) on March 10, 1923, the date of both of their birthdays. He had commissioned her to create a medal for The Hispanic Society of America in 1921.3  She was born in Cambridge, MA to an MIT marine biology professor and a mother who painted. Robin Salmon, Vice President and Curator of Sculpture, has divided Anna Hyatt Huntington’s life into eight periods in a catalogue for a recent exhibition at the museum and gardens titled “American Animalier: The Life and Art of Anna Hyatt Huntington,” January 29 to April 25, 2022. 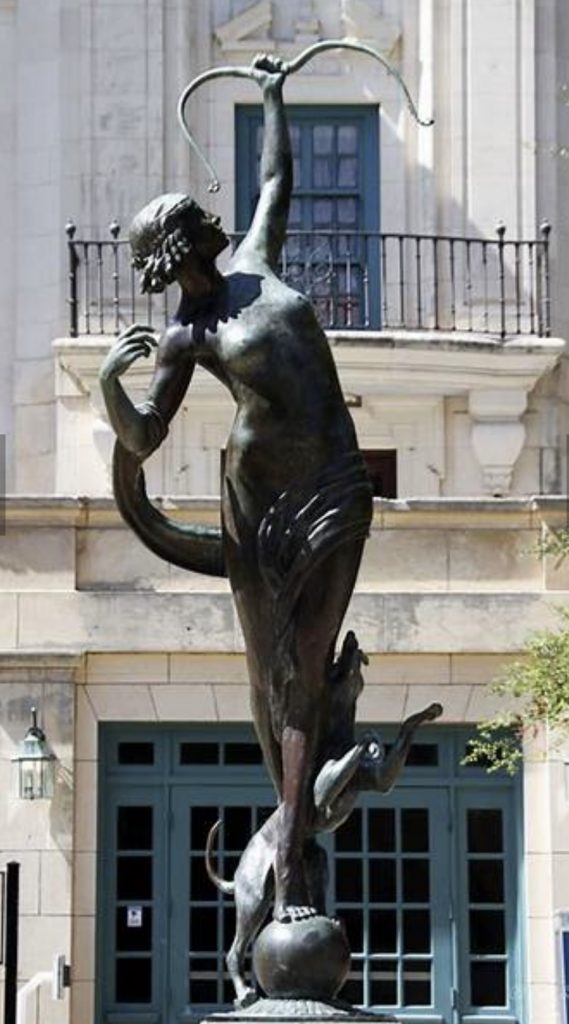 Anna’s childhood summers were spent in Annisquam, a saltwater harbor north of Boston on a family farm called “Seven Acres.” She first studied the violin but switched to sculpture following her sister who was also a sculptor. She was largely self-taught but became a keen observer of nature and animals when she traveled on field trips with her father. From 1903-1907 she lived in New York and went to Paris where she produced her first life size sculpture, Joan of Arc that was exhibited at the Paris Salon in 1910. A version of this sculpture was placed in New York City on Riverside Drive in 1915, and is the first equestrian monument of a woman produced by a woman in the city.

Anna Hyatt Huntington became one of the most famous American women sculptors of the twentieth century.  She is best known for her bronze goddess, Diana of the Chase, versions of which are collected in museums. This work became the prototype for an automobile hood ornament by a St. Louis motor company.  When the National Academy of Design awarded its Saltus Award of Merit to this sculpture, it sealed her career. Like most sculptors of her time, she also created utilitarian objects such as bookends, ashtrays, letter openers, windvanes, and the radiator ornament.4

Anna and Archer enjoyed a devoted marriage and led quiet lives. When she contracted tuberculosis around 1928 the couple sought a cure in sanitoriums in North Carolina, Arizona and Switzerland. But, in 1930 they purchased four rice plantations, 9,000 acres, along South Carolina’s coast, as a winter home.  They built a Spanish villa on the beach called Atalaya (watchtower) Castle, its antecedents found in Moorish architecture of Spain, Portugal and North Africa. At the Atalaya studio, Anna surrounded herself with monkeys, horses, geese, swans and even an alligator. She designed compatible furnishings for the Spanish manse and began to lay out the gardens with its first walls, walkways and paths in a butterfly design.  Today, Brookgreen Gardens’ mission is “to collect, exhibit, and preserve American figurative sculpture in a setting of native Southeast plants and animals.” During the Depression, the project provided work for the locals and for artists whose works were being collected.5

Brookgreen Gardens is a quiet joining of hands between science and art . . . .at first the garden was intended to contain the sculpture of Anna Hyatt Huntington. This has gradually found extension in an outline collection representative of the history of American sculpture, from the nineteenth century, which finds its natural setting out of doors. Its object is the presentation of the natural life of a given district as a museum, and as it is a garden, and gardens have from early times been rightly embellished by the art of the sculptor, that principle has found expression in American creative art.6

While still recovering from tuberculous, the Huntingtons set up kennels to reintroduce Scottish Deerhounds, popular in that country in the 19th century, back into the United States.7 This gentle breed provided her with ready models.  In Bethel, Connecticut, their Stanerigg Farm included eight miles of country roads where the dogs could be exercised. She owned a special bus to transport her dogs back and forth from Connecticut to Atalaya where the dogs could frolic on the beach.8 As a widow, her sister came to live with Anna and her oeuvre became more powerful, motion-filled, and humorous.  In 1932 she had begun to cast her sculpture in aluminum, one of the first to do so and today her Fighting Stallions, 1950, cast in aluminum, graces the entrance gates to Brookgreen Gardens. 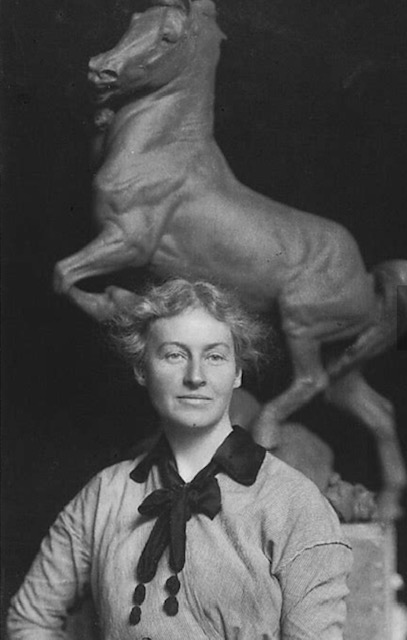 At the end of her life, Anna Hyatt Huntington believed that she been forgotten as the wave of abstraction and avant-garde art swept the nation but she always remained true to her practice: “I model what I see” and she preferred modeling with her hands and not tools.9 If for nothing else, Archer and Anna Huntington would be known today for the many women sculptors whom they supported and whose works they purchased as they developed Brookgreen Gardens.  A list of these 20th century women sculptors reads like a Who’s Who in the pantheon of American sculpture:  Bessie Potter Vonnoh, Gertrude Vanderbilt Whitney, Malvina Hoffman, Harriet Whitney Frishmuth, Sylvia Shaw Judson, and Eugenie Fredericia Shonnard. AWA member and former President, Diana Reuter-Twining, has recently had a sculpture collected by Brookgreen Gardens, Grasshopper, that has been permanently installed on the grounds.

Anna Hyatt Huntington was a prolific artist during the last twenty years of her life, creating ten life size equestrian commissions. Not forgotten when she died, Anna had received the Chevalier of the Legion of Honor of France, the Grand Cross of Alfonzo XII of Spain and received medals from the Panama-Pacific Exposition, the National Academy of Design, National Sculpture Society, and the American Academy of Arts and Letters. She was given additional awards from the Pen and Brush Club, the National Association of Women Artists, and the Scottish Deerhound Club of America. 10

The generations of the Huntington family have made great contributions to the culture and history of the United States including Brookgreen Gardens that is a National Historic Landmark, 15,000 acres of environmental preserve in New York state, The Hispanic Society of America, and the Mariner’s Museum in Newport News, Virginia. Family members were abolitionists and supported both Hampton Institute, a renowned Black college in Newport News, VA and Tuskegee Institute in Alabama where Arabella set up one of the first programs to educate Black women.   In addition, Collis, Henry, Archer – with Arabella and Anna – have given collections to the Metropolitan Museum of Art, Yale University, the Numismatic Society of America, support for a Poetry Chair at the Library of Congress, and the National Geographic Society, to name just a few. In 1940, the Huntingtons gave their townhouse at 1085 Fifth Avenue to the National Academy of Design for its headquarters.

I had the pleasure of revisiting Brookgreen Gardens recently and was struck once again by its beauty and “quiet joining of hands between science and art.”  I saw the exhibition of the works of Anna Hyatt Huntington, consisting mostly of small, original bronzes intended as models for larger works, her utilitarian objects of wrought iron and her furniture, and Huntington family portraits. I am thrilled that American Women Artists will hold its long-planned, in person, annual National Juried Exhibition at Brookgreen Gardens in exactly one year, May 13 to June 23, 2023. 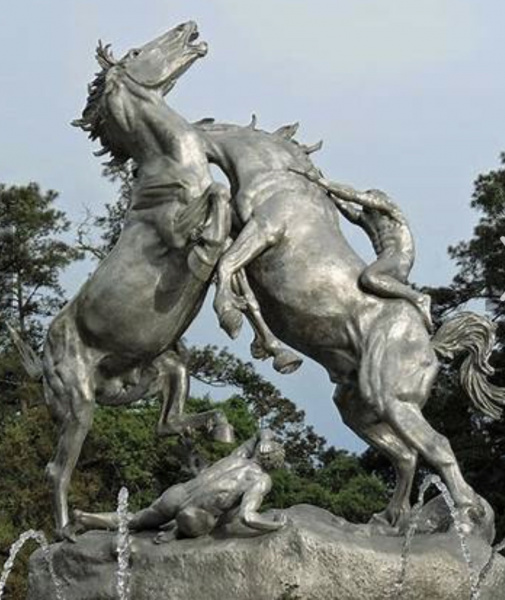