Oh my, there are countless stories of talented women artists who devoted their lives to more famous artist husbands and as a result have been largely ignored by the public.  A case in point is Sally Michel Avery, wife of well-known artist, Milton Avery (1885-1965). Sally Michel Avery has been afforded only sporadic mention over the years but was recently recognized in a New York Times article about a Milton Avery exhibition in Hartford, Connecticut that referred to her as a “perennially discarded wife.” 1 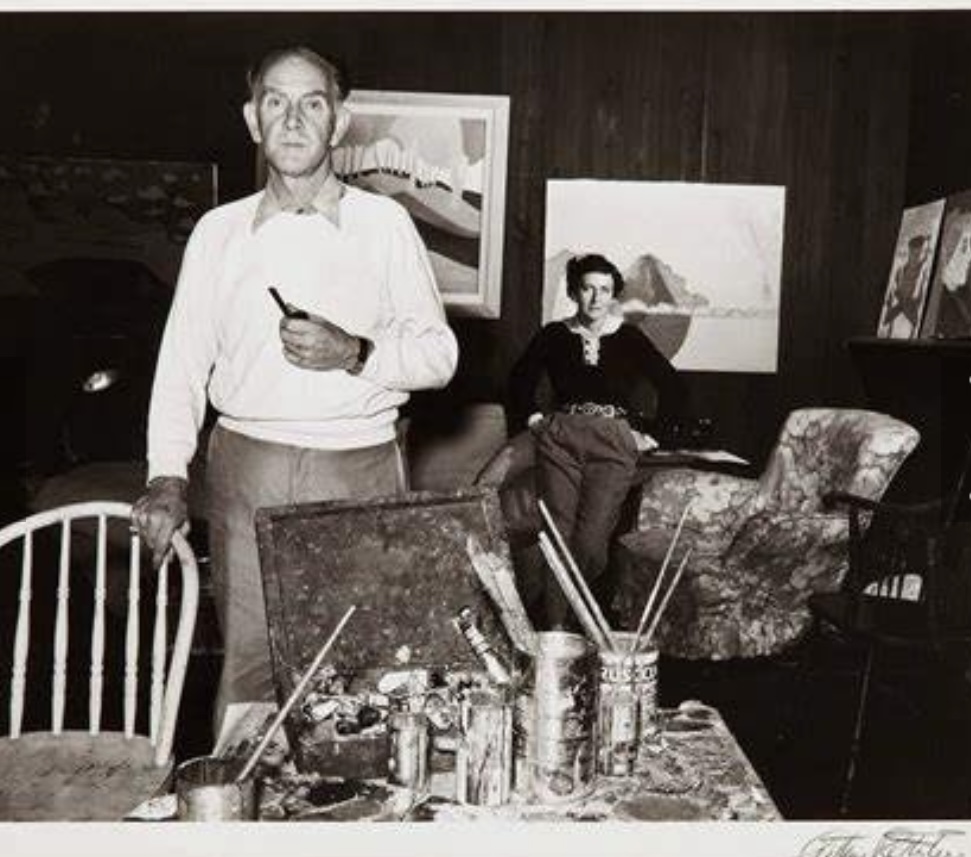 Milton and his wife, Sally Avery (Image from Pinterest)

Milton Avery was considered an outsider to any art group or movement. Yet he produced light and simplified abstractions mostly in landscape and figurative genres that were considered modernist. A major exhibition of 70 early works showcased last year at the Hartford’s Wadsworth Atheneum Museum of Art (organized in London and with the Modern Art Museum in Fort Worth), and was the most important consideration of his work since a Whitney Museum retrospective forty years ago.

But where is Sally Michel?

This year, 2022, a New York Times article written by critic Roberta Smith, reported on a recent show of Sally Avery’s artwork, a “sidebar” (tongue in cheek?) to her husband’s exhibition. D. Wigmore Fine Art, Ltd. in New York City has mounted a solo exhibition of Sally Michel’s extraordinary work. The article states that Sally’s work “has been seen as a knockoff of her husband’s but her contribution to its formation has yet to be fully recognized”, especially as both artists similarly distilled images into flat, dominant color forms.

The Wigmore exhibition features 30 paintings by Sally Michel (she always exhibited using this name] that share many of the tenets of her husband’s. Never enjoying a studio, the two painted “at home” their entire careers.  Deedee Wigmore has described the technique of Sally’s efforts as she worked from nature with sketches in watercolor or gouache and then converted them to thinly-applied oil paintings “transmitting a mood, time of day, weather, or season.” Using these media, she was able to create a “textural softness” to her canvases.  Wigmore continues “. . . Sally considered contrasts between straight and curving lines, discrepancies in scale, and different views of a single scene. Sally’s portraits of individuals were often close-ups isolated against flat backgrounds.”2 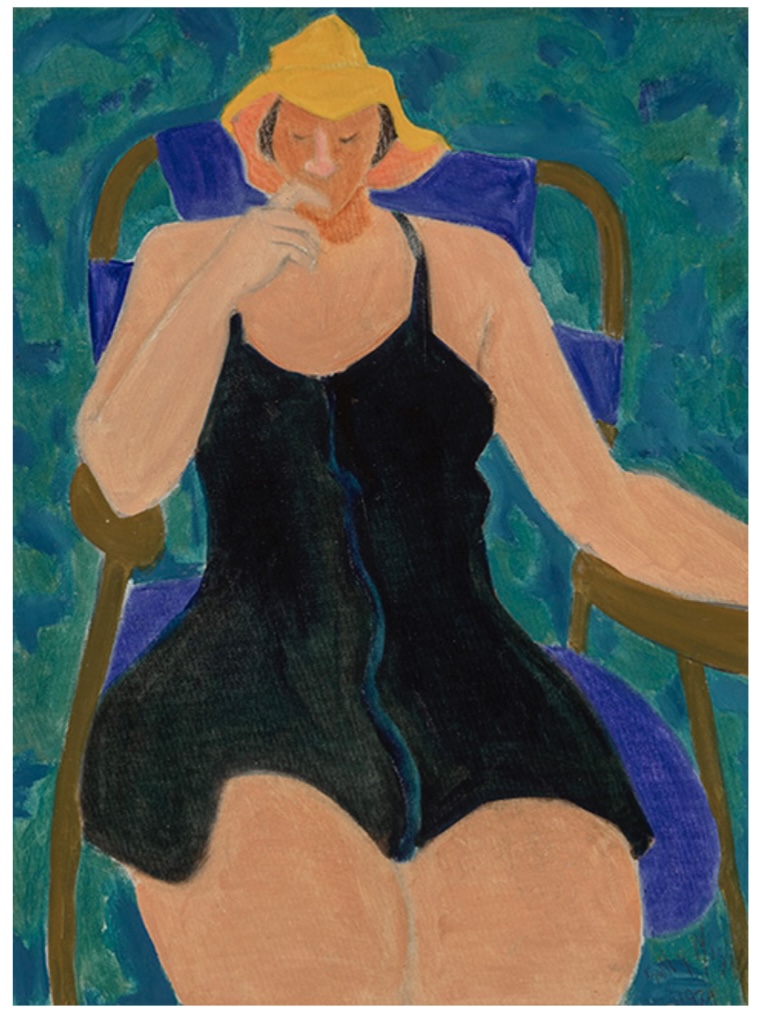 Despite being disassociated with any movement or group in New York, after they were married the couple socialized with several artists working in the Abstract Expressionism including Adolph Gottlieb, Barnett Newman and Mark Rothko, Marsden Hartley, and Stuart Davis, all of whom shared modern approaches to painting. While living in the city, the Averys toured museums every week and often sketched from a life model at the Art Students League. They remained consummate New Yorkers their entire lives.

The two artists met at the art colony of Gloucester, Massachusetts in 1924 and married in 1926. Both artists had been born in the state of New York; he grew up in Hartford, CT. She began to work in fashion illustration for Macy’s department store after high school in Brooklyn. They traveled in summers to gain new experiences and subject matter and Milton painted en plein air. Sally remembered those years in Gloucester, MA: “. . . he would strap his easel and canvas on his back and he’d walk out to the rocks.” 3 In the winters of the 1940s and 1950s she had to work as an illustrator for a column in the New York Times Magazine in order to earn a living. She painted alongside Milton in their Manhattan apartment at 294 West 11th Street. The two critiqued each other’s work and developed what scholars have called the  “Avery style.” 4  Sally Michel had an engaging personality but Milton was known as something of a curmudgeon.

The couple traveled to picturesque locations in order to paint like Gloucester, MA, and to Vermont, the Gaspé Peninsula in Quebec, Yellowstone and Glacier National Parks, Woodstock, NY, Mexico, Oregon and the Northwest, and Canada. In 1957 they made their only trip to Europe.  They also shared fellowships to the Yaddo and MacDowell Colonies in New England. In his late career, they spent winters in Florida. 5 After Milton Avery’s death in 1965, Sally Michel lived almost another forty years, until the age of 101, and she ensured that his life and oeuvre would live on. 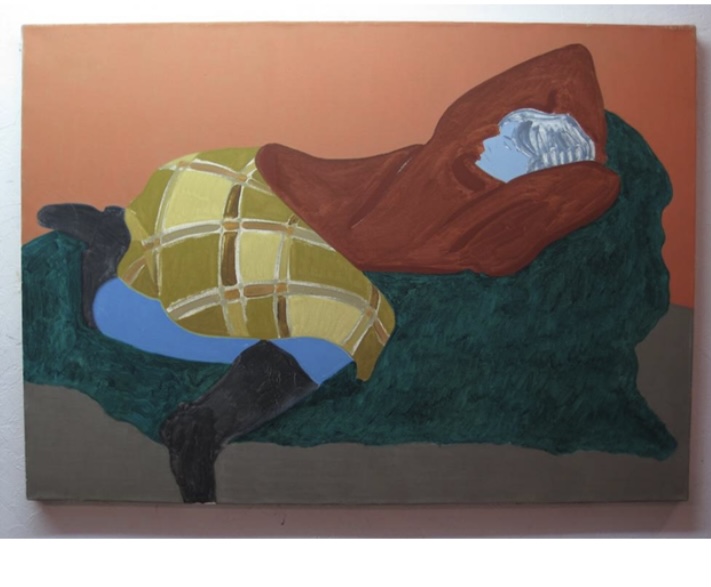 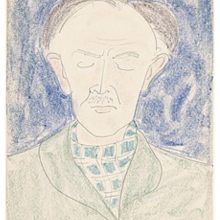 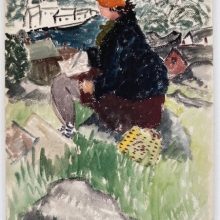 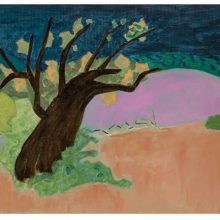 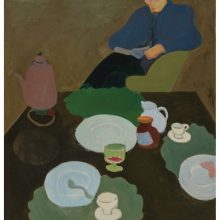 After Dinner, Oil on Canvas by Sally Michel