“I never gave up painting, I just changed my palette.” – Ray Eames

Ray and Charles Eames were erroneously referred to as “the Eames Brothers” in a 2006 New York Times Magazine article. (1) Ray Eames was actually Bernice Alexandra Kaiser, a nickname she legally adopted in 1954, and was the professional partner and wife of Charles Eames. The couple is considered America’s foremost 20th century design collaboration. 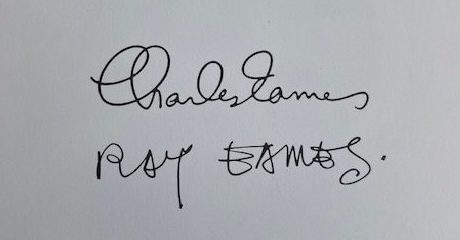 Signatures of Ray and Charles Eames

Ray’s contributions to the partnership have only grudgingly come to light in recent years. (2) The couple designed chairs; wall unit systems, desks and other furniture; low-cost pre-fab houses intended for average post-war Americans; toys; museum exhibitions; the epochal Eames lounge chair; and created  more than 100 short, avant-garde and educational films. Unlike most men in the testosterone Mid-century design world, Charles Eames, persistently unheard, heralded his wife’s parity in their partnership using terms like “we,” and “ours.” The New York Times indexed its internal files under Charles and his “wife and assistant.” (3) In 1956, host Arlene Francis on NBC’s “Home” television show, presented the couple and introduced the Eames lounge chair. After a few words with Ray, Francis quickly shifted to Charles to describe their designs. Ray returned to the stage at the end of the program. (4) 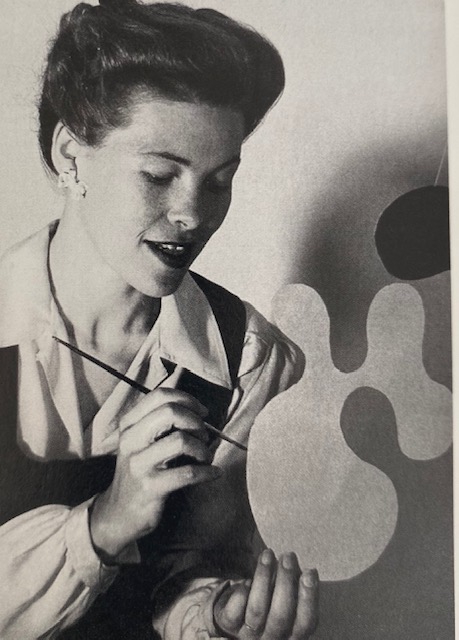 Ray was Bernice Alexandra Kaiser, born in Sacramento, CA, in 1911, nurtured by her parents, especially her father who managed the vaudeville Grand Theater there. She graduated from Sacramento High School and then, with her widowed mother, moved to New York State to be near her brother at West Point. Ray entered the May Friend Bennett School in Millbrook, NY, a well-known finishing school. After two years, she moved to New York City to attend the Art Students League and then followed legendary art teacher Hans Hofmann to his own art school in Manhattan. Hofmann also taught in Provincetown on Cape Cod in summers, stressing his modernist theories of color and form in nature through a push/pull spatial method adopted by many Abstract Expressionists. While studying with Hofmann for six years, Ray became a founding member of the American Abstract Artists group that picketed conservative galleries and promoted radical avant-garde work in NYC. She protested alongside Lee Krasner, Laszolo Moholy-Nagi and Fernand Leger. While absorbing the city’s cultural milieu, Ray developed passions for art films, modern dance (studying with Martha Graham and Hanya Holm) and the geometric work of Piet Mondrian. (5)

Considering herself a painter in New York, Ray next headed to the Cranbrook Academy of Art outside Detroit, a graduate school of design, art, and architecture. Charles Eames, a St. Louis native, was already well known, having studied architecture at Washington University. At Cranbrook, he had become the new Head of the Industrial Design Department, forming his career’s mantra using industrial technologies: “bring the most of the best to the greatest number of people for the least.” (6) A relationship developed between Charles and Ray when she helped prepare drawings for a Museum of Modern Art (MOMA) competition entered by Charles Eames and his architect colleague, Eero Saarinen, son of Finnish architect Eliel Saarinen who was then head of Cranbrook. Eames soon divorced his first wife, and he and Ray were married in 1941. Both were perfectionists and problem solvers with complementing personalities. Ray brought to the union a strong sense of form and an intuitive, trained eye for design learned from Hofmann. Charles had already evolved into a modernist, and their marriage allowed Ray Eames a ready platform of professionalism rarely available to women at that time. (7)

The two honeymooned in California, and by serendipity they met John D. Entenza, a proponent of modernism and owner of the prestigious Arts & Architecture magazine. The Eameses settled into the Stratmore Apartments in L.A., designed by Richard Neutra, and Charles began to design sets for MGM. They were a striking couple: he, the tall, handsome figure and she, the pixie in “Dorothy” type dresses with a hairstyle of bangs that she never abandoned. The Stratmore in West Hollywood was a novice project exemplifying the garden movement and land use planning concepts. The couple found a perfect home among a circle of designer friends. Entenza invited them to participate in a project called Case Study Houses, his intention to design and build 34 post-war prefab houses at low costs; 23 of which were actually built. During this period, Ray designed 28 covers from 1942 to 1947 for the Arts & Architecture magazine (individual copies sell for $900-plus today) and also wrote articles for the magazine on Modernism, along with Jackson Pollock and Buckminster Fuller. Ray’s imaginative, highly graphic covers incorporated photography, collage, and other components reflective of the work of Hofmann, Picasso, Miro, and Calder.

As World War II waged, the couple began working for the U.S. Navy to develop molded-wooden splints and stretchers for wounded soldiers. While working on this project, they set up a space in Los Angeles to produce the splints (5,000 were made) and began seriously researching and designing molded-plywood furniture with which their names are immortally associated. Concomitantly, they focused on the 1941 project for the Case Study Houses. Entenza hired eight architects to design these prototypes, including Richard Neutra, Eero Saarinen, and another modernist architect, Rodney Walker. On a picturesque bluff overlooking the ocean in Pacific Palisades, Charles Eames and Eero Saarinen designed and built Case Study House #9 for John Entenza. On the same property House #8 was designed, modified, and built by Ray and Charles Eames and in which they lived for the rest of their lives.

The Eames house is an L-shaped design with a detached studio using wartime materials, set against an embankment with a view across a meadow to the Pacific Ocean. The 1949 house served as a laboratory for the Eameses’ design inventions for three decades. The exterior was “enlivened by the use of a variety of textures, colors and materials orchestrated by Ray Eames.” (8) She also received singular credit for their house’s interior and decorations through what she called “functioning decoration,” studied arrangements of ordinary objects including toys, rugs, masks, driftwood, and tokens from the couple’s vast travels. At the time, critics considered her interiors to be visually dense, but today they are celebrated as a design prototype for Post-modernism. (9)

Charles and Eero Saarinen again won a 1942 MOMA competition for “Organic Design in Home Furnishings.” By this time the couple had set up the Eames Office in Venice, where their collaborative design, experimentation, and production work took place with other rising designers including Harry Bertoia and Alexander Girard. Their MOMA entries included molded chairs, wall case furniture, and tables. Ray operated the machinery that produced the molded curves of the furniture and created sculptures from these curvilinear materials and designed textiles for certain furniture coverings. 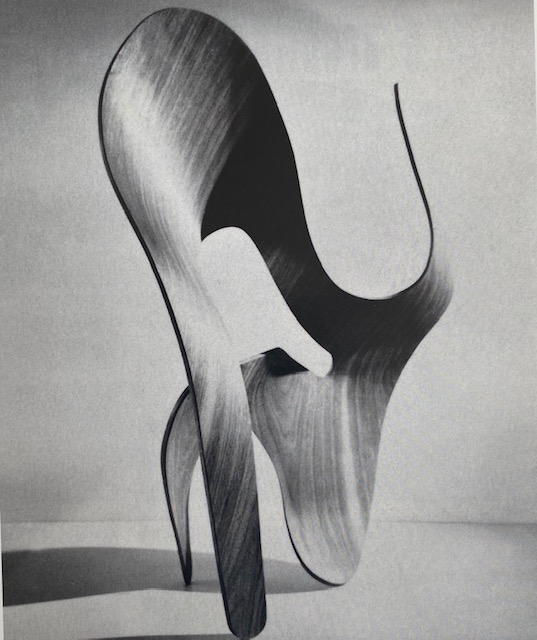 With limited space, it is impossible to discuss all the extraordinary designs that Ray and Charles Eames created for the modern, post-war age. In addition to the archetypical chairs which they also produced for children, they continued to refine the molded wood process, produced plastic chairs and tables with metal legs, then wire-mesh chairs, and finally fiberglass chairs for another 1948 MOMA competition. The fiberglass, many-colored chair quickly proliferated worldwide in schools, restaurants, airports and offices. It soon expanded into “tandem sling” seating for stadiums, airports, and theaters because of durability and easy replacement.

In 1949 Herman Miller opened a West Hollywood showroom designed by Ray and Charles Eames and had begun to produce some of their furniture. The interior featured a system of floor-to-ceiling bays to admit natural light and floor space with home or office settings filled with movable partitions and placement of toys, flowers, plants, folk art, photomurals and paintings and sculptures from local galleries. (10) The Herman Miller firm also introduced the Eameses’ most lasting legacy, their legendary Lounge Chair and Ottoman in 1956. Charles Eames hoped that the chair would look and feel like “a well-used first baseman’s mitt.” The chair and ottoman were an immediate success and by 1975, 100,000 of them had sold at an initial cost of $404. Still in the firm’s catalogue, the chair and ottoman list for $3,500. (11)

From the beginning of their joint careers, the Eameses practiced “serious fun” in all their undertakings, including designing exhibitions. The 1961“Mathematica” installation for the California Museum of Science and Industry was sponsored by IBM and introduced interactive programming and deciphered complex mathematical theories. For IBM at the 1964 New York World’s Fair, they designed the Ovoid Theater interior that showcased multi-screens, and in one film used a sleuth-like detective Sherlock Holmes as a metaphor for introducing the oncoming computer age. The Eameses produced over 100 short films, including “Banana Leaf” (1972), highlighting their love of India culture; and “Day of the Dead” (1957), a Mexican festival. Their most famous film, “Powers of Ten” (1977), teaches the concept of exponentiality of time through a journey of sequences and is still used as a learning tool. 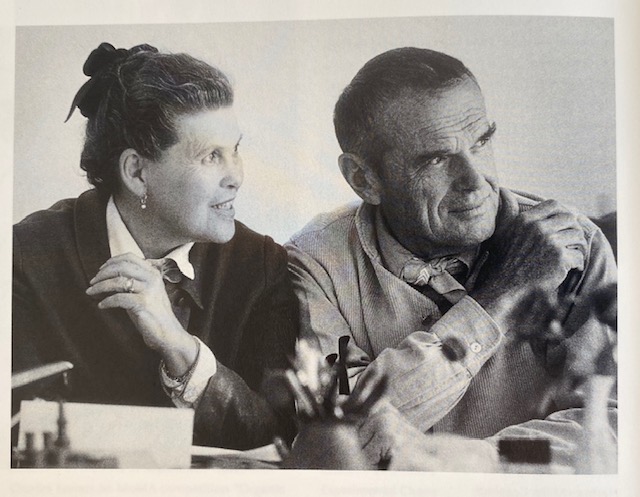 Ray Eames is almost always photographed alongside Charles, the two sitting quietly together in deep discussion, frolicking on a hillside, or appearing side-by-side in production. “Serious fun” always informed their work and marriage. Charles preceded Ray in death by ten years, and she spent the last decade of her life compiling a catalogue raisonné of their work (published in 1989) for the Library of Congress. Their design prototypes are held in The Vitra Design Museum in Germany. No longer marginalized, Ray Eames’s elevated stature exemplifies her partner’s declaration: “Whatever I can do, Ray can do better.” (12)

My California designer friend, Barbara Barry, lives in a mid-century Rodney Walker house. Walker, one of the architects for the Case Study Houses, lived in this house and considered it his masterpiece. Barry describes her response to the aesthetic, “Living in a Mid-century house has heightened my awareness: the nuance of color, form, shadow, the arc of the sun, the close up and the distant. My psyche is fed by a different well. The design of this house is a testament to my belief in the beauty and transformative power of nature.” 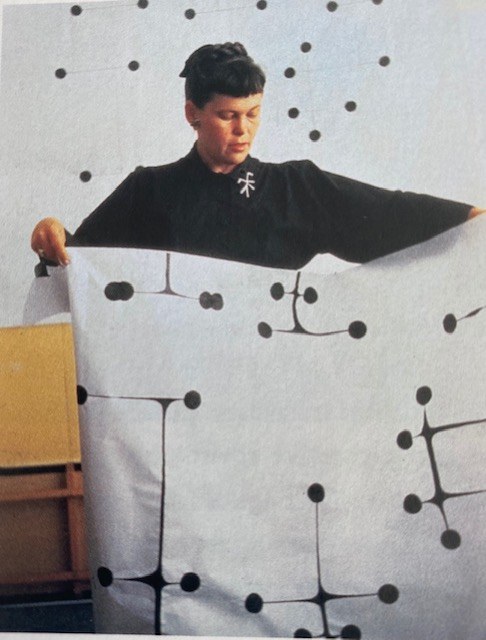