Most of us know the names of women painters of the mid-twentieth century Abstract Expressionism movement in New York, such as Elaine de Kooning, Grace Hartigan, and Helen Frankenthaler, but Nell Blaine is almost unknown. In 1957 Life magazine did mark Blaine’s stature among a small coterie of rising women artists in an article titled “Women Artists in Ascendance” that profiled her along with Helen Frankenthaler, Grace Hartigan, Joan Mitchell and Jane Wilson. The writer noted that all the artists had “won acclaim not as notable women artists but as notable artists who happen to be women.” Nell was photographed looking at a drawing while sitting on her studio floor. The caption described Blaine as a lover of nature and light.1 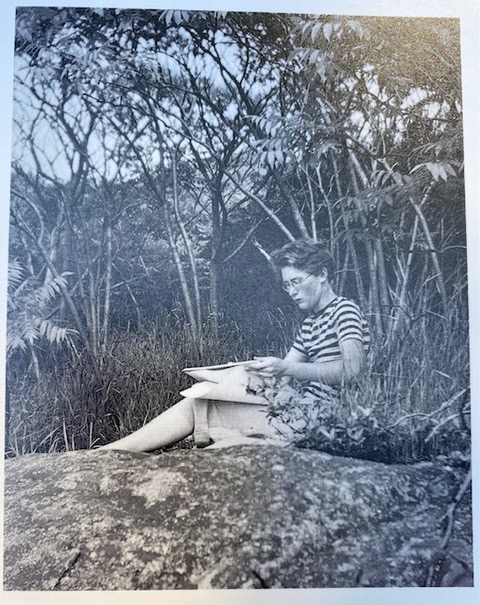 Blaine’s rapid recognition and remarkable output amid a trying personal journey make her an important woman artist of her generation. I recommended in an earlier blog the seminal popular book: Mary Gabriel, Ninth Street Women. . . Five Painters and the Movement That Changed Modern Art, 2018, a study that has significantly recognized the stories of mid-century New York women painters. Unfortunately, Nell Blaine was not included among them.

Born in Richmond, VA, Blaine was a frail child who eventually discovered her passion for art after receiving corrective eyeglasses at age two. Her mother was a school teacher and her father struggled financially during the Depression. Her eyesight was eventually corrected, and at age thirteen she belatedly became a healthy student. Flowers became her passion around her family’s modest home because both parents cultivated gardens growing zinnias, bluets, and roses.

Richmond artists recognized Blaine’s artistic talent, and with a number of financial aids, she studied at the Richmond School of Art, which is now Virginia Commonwealth University. In 1942 at age 22, Blaine was recommended by Worden Day (1912-1986), a Richmond woman artist, to study with the famous abstractionist and renowned teacher Hans Hofmann (1880-1966) in New York City. Hofmann was considered a god-like figure who taught a push/pull method of flattening “planes as constructers of volume.” He also conducted a famous summer art school in Provincetown, MA. Blaine became his assistant in 1943. While studying with Hofmann, she met Jackson Pollock and Lee Krasner and adopted a semi-abstract style.2 She also quickly discovered the work of Piet Mondrian, Ferdinand Leger, Willem de Kooning, and Jean Hélion. She experimented early on in her work with Mondrian’s three primary colors and edges, Jean Hélion’s biomorphic forms and relationships, and popular jazz-inspired improvisation.

Blaine later reflected on her introduction to urban life: “The moment I hit New York, I was like a bird out of a cage.” 3  She had found a welcoming atmosphere for painters in the creative milieu of Greenwich Village, where women artists were receiving support at Peggy Guggenheim’s uptown modernist gallery called Art of the Century. Blaine also became a member of the progressive American Abstract Artists in 1945 and was a co-founder of Jane Street Gallery, which supported modernism. She married Robert Bass, a musician and photographer in 1943, but the marriage ended in divorce after five years; it is said that she had too much energy for him. In order to survive financially, she also worked in graphic, theater, and costume design. Blaine designed the very first cover and logo for Village Voice magazine, established in 1955 as the first alternative newspaper in the country. In her Village neighborhood she knew all the movers and shakers in the arts. Her friends included critic Clement Greenberg who favored her artwork, Elaine and Willem de Kooning (Elaine wrote about Blaine’s work,) Fairfield Porter, Larry Rivers, Franz Kline, Robert de Niro, Sr., and poets like Frank O’Hara. Leland Bell, an artist and jazz drummer, introduced Blaine to jazz and its leading musicians, and as a result, rhythm and syncopation began to appear in her work.

“By the early 1950s Blaine was receiving fellowships to Yaddo and MacDowell Colony art retreats in New England that brought together the best “creatives,” not only in art but all artistic disciplines. The decade of the 1950s was Blaine’s heyday and her career included 55 one-woman shows and a retrospective. She was also the author of several books. She received painting stimulation by traveling widely with her artist friends, such as Larry Rivers, Frank O’Hara, and Jane Freilicher, to places in Vermont; Connecticut; Woodside, CA; Oaxaca, Mexico; France; Italy; Austria; and Greece. 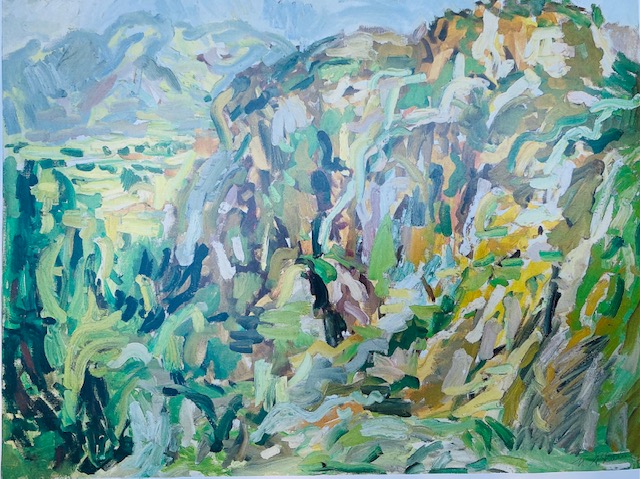 She first visited the art colonies in Gloucester, MA in 1943 and would eventually buy a property there in 1974 with a surprising inheritance from her mother. A converted barn became her residence and summer studio overlooking the outer harbor in Rocky Neck. While traveling with her friends she was also influenced by the verdant green landscapes of New England and the bright textiles in Mexico and Europe. But her trip to Greece in 1959 changed the course of her everyday life and art career. She grew weak while staying in Greece and was diagnosed with bulbar spinal polio and flown to Athens to be treated in an iron lung. She was later transferred to Mt. Sinai Hospital in New York for recovery. She was never able to walk again and spent the last 36 years of her life in a wheelchair. Her many friends, including heir James Merrill, rallied around her by sponsoring benefits for her financial care. She lived with full-time caregivers and help from loving friends for the rest of her life. In 1967 she met Carolyn Harris, also a painter and Southerner, and they became partners until Blaine’s death.4

After her recovery she had several surgeries on her right hand, but that arm remained paralyzed, so she taught herself to paint in oil with her left hand. She could paint watercolors with her right hand on a horizontally-flat paper surface. Nell Blaine moved to a 210 Riverside Drive apartment on the fifth floor in New York, where she lived and painted during winter months. Her windows overlooked the constant traffic flow and street activity of the city stretching all the way down to the Soldiers’ and Sailors’ Memorial Monument. For the next three decades Blaine lived in this apartment and in her seasonal studio in Gloucester. The majority of her work from the early 1960s until her death were painted in these locations. 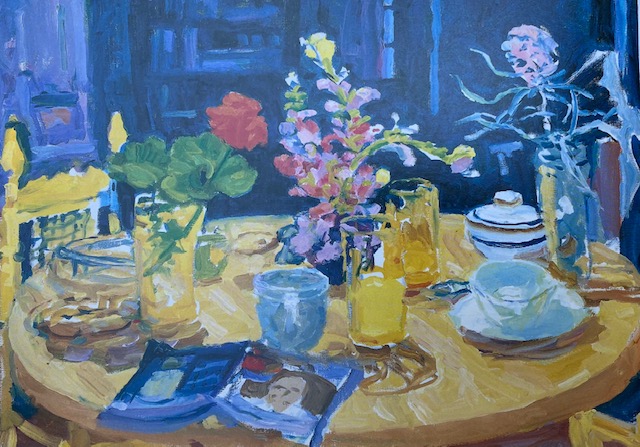 I don’t like the idea of closing down any fixed position. I don’t like it in abstraction,
and I don’t like it in relation to the figurative. I think things should be left more open,
and so much criticism tends to close the doors behind; Now we’ve come to this, we must
therefore proceed to this position. I find it a stifling, anticreative atmosphere [that] is created by that. The people who work from fixed position may feel very secure but work from doubt. From one day to the next I couldn’t imagine saying this is what I do.5

Blaine, like many of Hofmann’s students, transitioned from his strict painting philosophy. She took his principles and synthesized them into a representational genre and figuration and applied her own painterly technique.6 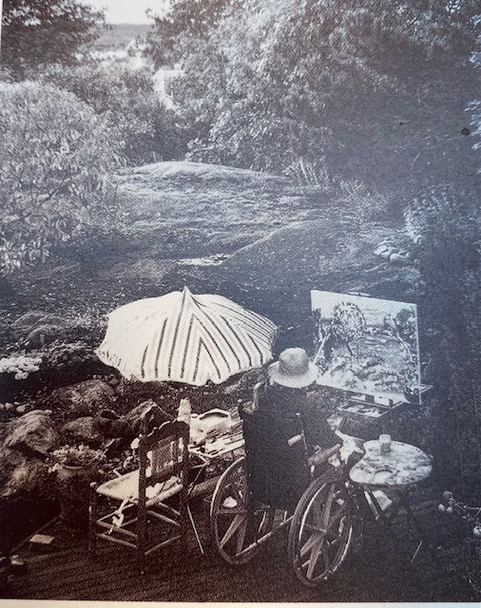 Before her struggle with polio, Blaine was considered on the forefront of the next generation of painters, and her work was often termed Post-Impressionist. With polio, Blaine’s bold, colorful artwork continued to be received favorably and as a delight to the eye of the viewer. After polio she wrote that she often put down “every color I have” on her plate glass palette (38 colors) and attacked an oil canvas directly without any preliminary composition or drawing. Throughout her career she also cared for the tools of her trade and purchased the best quality sable brushes and paint that she could afford. Without mobility, her easel was shortened to wheelchair level and she painted smaller-size paintings with a maximum of 40” for a canvas that forced her to paint more compactly. She relished painting from her city windows and especially painting plein air in her summer gardens surrounding her Gloucester studio. Her favorite time to paint outdoors was later afternoon when the colors were violet, and she painted many of her brilliant tabletops at night with a darkened background of noir windows. She was interviewed later in life and was asked how her art changed after she became encumbered with polio: “What I did afterward represents me, myself, free and detached.” 7

Nell Blaine deserves more recognition. Her work was exhibited with that of Maine artist Lois Dodd and other landscape painters last year in East Hampton, NY, on Long Island. At the Drawing Room Gallery, a critic described Blaine’s exhibited work as most of her devotees see it: [Her] “. . . watercolors corral color within linear borders that are loosely expressed but strongly defined.”8 Blaine was also a beloved personality, possessed incredible talent, and must have had enormous inner strength to power through her physical handicaps in order to continue to paint. I recommend that you come to know Nell Blaine and to enjoy her powerful work! 9 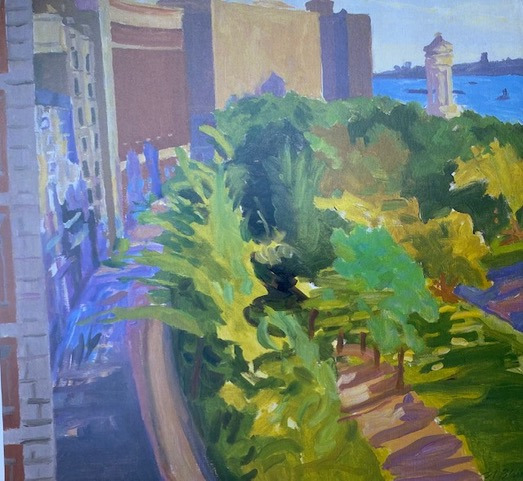