I was walking in a section of National Memorial Park in Falls Church, VA with a plat map looking for the grave marker of Edith Gregor Halpert (1900-1970).  Epic gallerist, Edith Halpert led the mainstreaming of American modernism and folk art into the canon of 20th-century art history. Halpert established the Downtown Gallery in 1926 and until recently, she has been overlooked as an influential art figure. Successful artists know the importance of gallery representation and Edith Halpert provided powerful support for her American artists between the world wars. 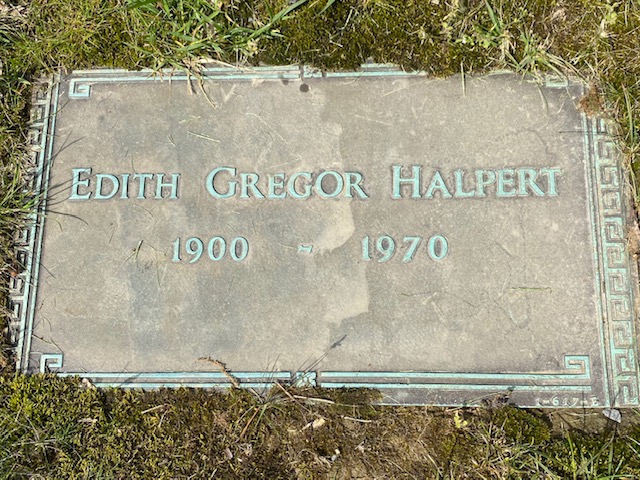 Edith Halpert was born in Odessa, on the Baltic Sea in 1900 and immigrated with her family to New York City in 1906 settling in Harlem.  She showed immediate intellect in public schools and a penchant for art.  In 1914, lying about her age, she was accepted into classes at the National Academy of Design. A few years later she began to support herself working in retail. Her mathematical acumen resulted in her finding work at Macy’s in 1915 as a “comptometer” operator, calculating sales.  Later she worked at Bloomingdale’s and finally Stern Brothers department store, rising there to the advertising department.   While still taking classes at the NAD, her teacher, Leon Kroll, advised her that her talent was disappointingly not strong enough to make it as an artist.

Around 1917, Halpert began to investigate the gallery scene in NY as an outlet for her art interest in lieu of becoming an artist.  Stieglitz, Newman, Montross, Kraushaar, and MacBeth were already showing works of the modernists. Located in Greenwich Village, Gertrude Vanderbilt Whitney, a sculptor herself, showed current realistic art, but not for sale, in her converted-stable studio run by Juliana Force. Halpert met Sam Halpert (1884-1930), a sophisticated and well-traveled artist, whom she married in 1918, later remarking that she had “married American art.” [1] She soon discovered that she would be the breadwinner and a decade later, divorced Sam Halpert. With money saved from her management work for a bank, the couple traveled to Paris in 1924 where his ties led Edith to meet prominent modernists.  Halpert also learned from French art dealers including Vollard who represented Degas and Cezanne.  Returning from France, the couple participated in the summer art colony in Ogunquit, ME. There Edith met artists like Marsden Hartley, Barnard Karfiol, Yasuo Kuniyoshi, George Bellows, Edward Hopper, among others. They were friends with Hamilton Easter Field, a wealthy arts advocate, and teacher. Lloyd Goodrich and Holger Cahill, emerging art experts, were also staying in Ogunquit. [2] With these experiences, Halpert returned to New York City that fall intent on opening her own commercial art gallery, the first to be owned by a woman. 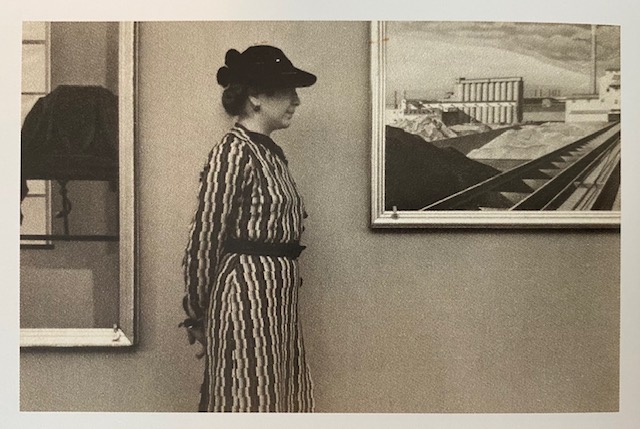 Ignoring midtown Manhattan where established galleries sold European Old Masters and Impressionists, Halpert decisively located her gallery at 113 Thirteenth Street in Greenwich Village and eventually called it the Downtown Gallery.   Juliana Force, at the Whitney Club, described Edith Halpert as attractive, quick-witted, and a superb saleswoman. [3] The Downtown Gallery’s first exhibition was a group show and Stuart Davis, Max Weber, and Yoshi Kuniyoshi solo exhibits followed. Over four decades at the gallery, Edith Halpert introduced an entirely new platform for managing an art gallery combining her expertise in retail and efficiency management with her passion for American art.  Halpert set out not to sell to clients who cared only for speculative investment. Instead, she fostered personal relationships with her clients and “placed” artworks with formidable private collectors.  Her inclusive mission also included making art affordable for beginning collectors by selling small works and prints intended to evolve her clients’ taste from an artist’s early work to its mature opus. Additionally, she instituted a policy allowing artworks to be taken home on approval and provided a flexible payment plan.

The list of business innovations Halpert introduced is lengthy and her purpose never wavered in seeking equability for contemporary American artists. Always dressed elegantly like her competition uptown, she promoted the individual artist, not the current art movements, thereby avoiding the constant clashes prevalent in modern art circles. At the gallery’s front desk sat her African American assistant and she was the first to rediscover and show work of “Negro” – African American – artists including Jacob Lawrence and Horace Pippin. Following European gallerists whom she visited each summer, she published gallery catalogs on her stable of artists and produced monographs of her painters. She worked with corporations to grow their collections and developed themes for shows that paired multiple artists in a single show comparing their modernist works with historic paintings.  Other thematic exhibits included Sport in Art, Soldier Art, a discounted Christmas show, and Mr. and Mrs. Art, the latter cleverly aimed at post-WW II couples who had diverse tastes. She put the financial welfare of her artists first by establishing monthly contracts so that they could pay rents and living expenses.  Eschewing prevalent competition among gallery owners, she worked with them. Prominent leader, Alfred Stieglitz, who had previously refused to loan his artists’ works, signed a consignment agreement with Halpert. After Stieglitz closed his gallery, the Downtown Gallery represented O’Keeffe (for a short time), Marin, Dove, and Hartley.

On a broader art stage, Halpert helped establish the Association of Dealers in American Art and began to spearhead art fairs, seventy years before they became a common collective tool for marketing art. She initiated the Municipal Art Show in Atlantic City, NJ in 1929 where she invited several dealers to exhibit seventy works of the best American artists at the time including O’Keeffe, Hopper, Sheeler, Burchfield, and others under one roof.  The interior featured Art Deco designs and tubular furniture.  The New York Times noted the success of this innovative arrangement that: “…pioneered in this worthy combination of furniture and paintings . . . serving as a foil for paintings on the walls.” [4] Halpert also instituted traveling exhibitions for her artists and staged exhibits in department stores. She became involved in WPA’s federal arts support in the 1930s promoting exhibitions and museum accessions created by the then federally-supported 5,200 artists. At the same time, she creatively sold practical, alternative artworks in her gallery: Stuart Davis designed fabric, Kuniyoshi designed wallpaper, and Georgia O’Keeffe, with Davis, designed silk scarfs. Edith Halpert faithfully monitored the copyright fees due to these artists for licensing their works. [5]

Edith Halpert arranged viewing areas in the Downtown Gallery in a novel way by providing a domestic atmosphere, hanging art in a “home” like setting among furniture and comfortable accessories. She used this welcoming space for lectures, poetry readings, and other intellectual gatherings. Despite financial hardships heaped on dealers during the 1930s Depression, Halpert was able to quickly pivot and introduce a new art form into her inventory.  She had bought a summer cottage in Newtown, CT and at country auctions, she discovered a bounty of American antiques that could be bought cheaply. As she began to collect these objects, she became a self-taught expert, fashioning a market for the “aesthetic” attributes of what she called American Ancestors. [6] In 1935, Edith Halpert made a major discovery, twelve artworks by William Harnett that immediately received critical acclaim. These still-lifes have become iconic works in American art history. Halpert remarked that Harnett “was the biggest sugar daddy I ever had.” [7]   These Harnett paintings later constituted the only public scandal that touched the Downtown Gallery when later research revealed that John Frederick Peto, a Harnett student, had painted at least half of the trompe l’oeil works. [8] 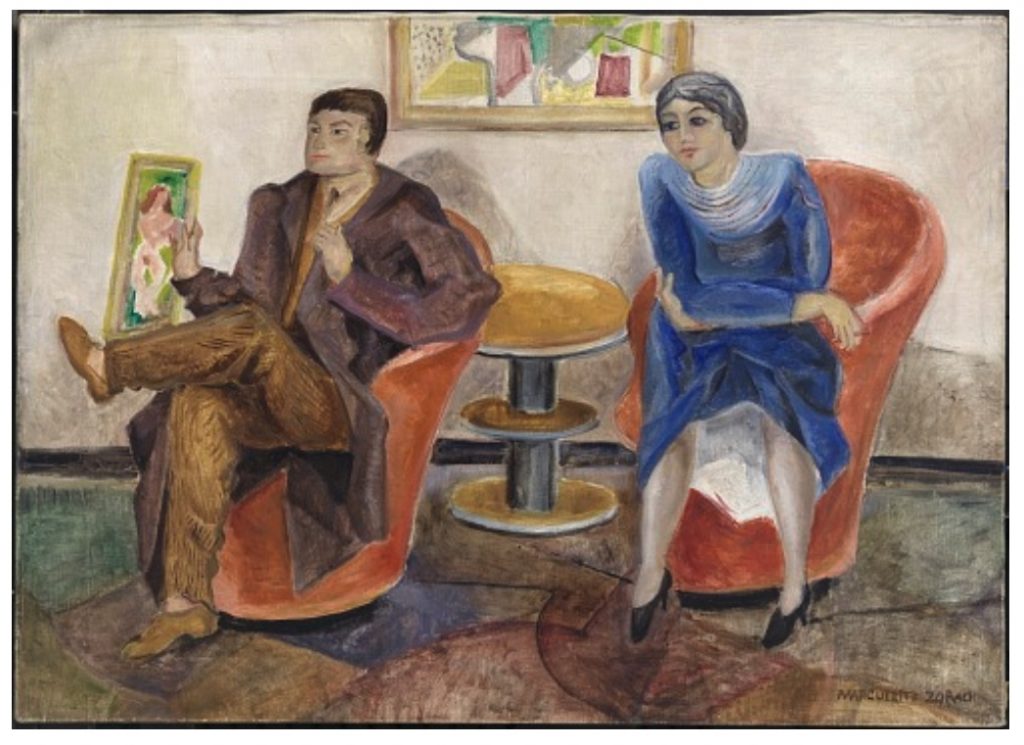 Another lasting legacy of Edith Halpert includes two women clients who built distinctive collections through her guidance.  In 1928, Halpert introduced Abby Aldrich Rockefeller to modern art and developed Rockefeller’s passion for American folk art. Together they built the Rockefeller folk art collection first shown at the Museum of Modern Art that Rockefeller had helped establish in 1929. [9] This unsurpassed folk art collection including Edward Hick’s Peaceable Kingdom eventually went to Colonial Williamsburg in VA where Abby and John D. Rockefeller, Jr. restored the colonial city in the 1930s.  Halpert also shaped a similar collection of folk art for Electra Havemeyer Webb, another wealthy collector, who created the Shelburne Museum in VT in 1947.

A meticulous record keeper and self-advocate, Halpert complained near the end of her career about the constant flow of students, historians, museums, and collectors wishing to interview her and research her copious archives as well as her art collection. In the early 1960s, Halpert gave lengthy interviews and donated her gallery records and personal papers to the Archives of American Art, Smithsonian Institution, Washington, DC.  The Corcoran Gallery of Art in DC courted Halpert to donate her collection. These negotiations stalled so she revoked her will in 1965 without disposition instructions.[10]  Sotheby’s later dispersed her private collection of over three hundred works for a shocking $3.6 million, an enormous sum in 1973 because few American art auctions had taken place before 1970. Her overall estate was valued at more than $22 million fourteen years ago. [11]

I was disappointed when finally locating Edith Gregor Halpert’s simple gravesite which does not recognize Halpert’s formidable contributions to the art world. Yet, Art Digest described her talents and her vaulted place on the art history stage years before she died: “ . . . good taste, artistic sensitivity and executive skill . . . . She can well be proud of her twenty-year labor in the vineyards of our native art expression.  Few have equaled her success along the pioneering paths.” [12] 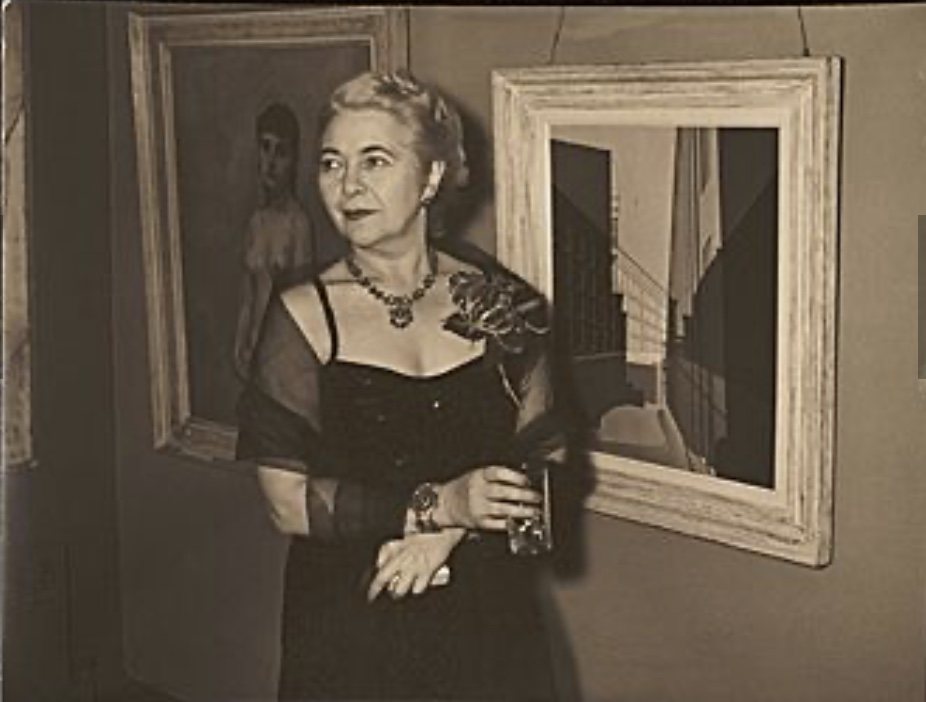