I was introduced to the resplendent paintings of artist Doris McCarthy (1910-2010) when I painted with friends in Jasper, B. C., including Wendy Wacko, who owns the well-known Mountain Galleries in western Canada’s historic Canadian Pacific Railroad hotels.  Wendy met Doris McCarthy and traveled with her beginning in the 1970s, and has carried on McCarthy’s legacy since her friend’s death. 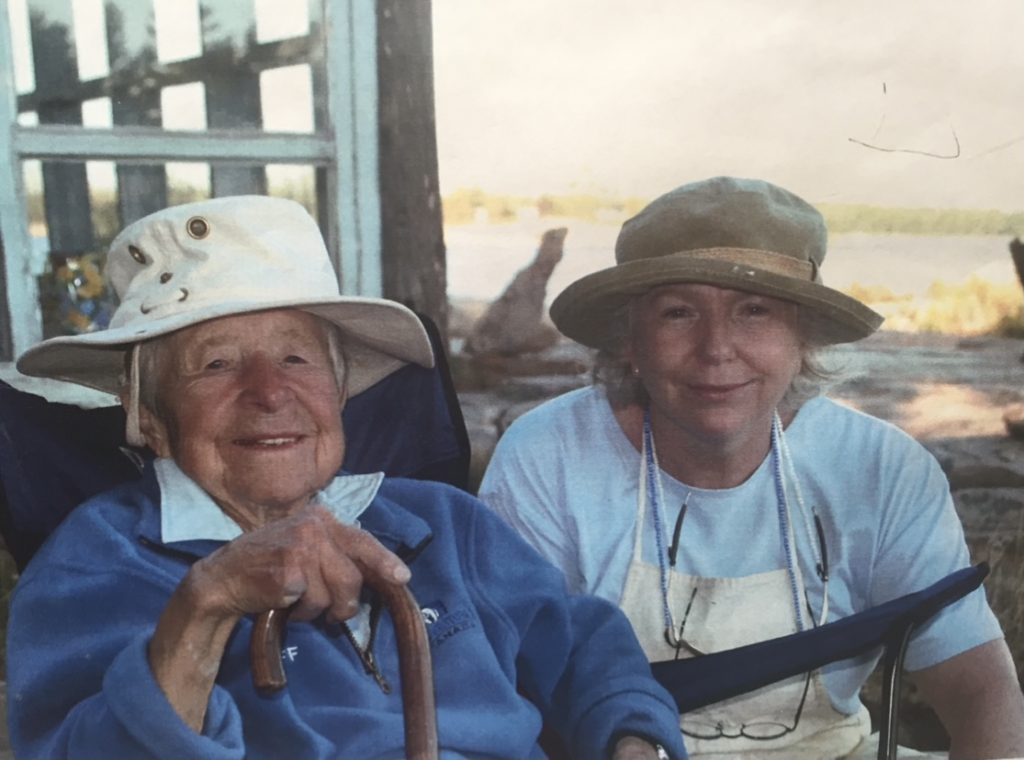 A landscape painter, McCarthy followed the path of the renowned Canadian Group of Seven artists. These Impressionist artists, with their then newly-distinct modern style, “took to the woods” and wild areas of their native country to record the waters and rugged geography of northern Canada.  These outdoorsmen (yes, all men) painted directly from nature and rarely allowed intemperate climates to impede their mission. The Seven established themselves in 1920 and loosely worked together until 1933. Canadian art circles quickly took note of their work, realizing that Canada has its own history, culture and geography worthy of recording, and turning away from a European narrative. But ask almost any Americans who love art if they have heard of the Canadian Group of Seven, and the answer is usually “no.” American comedian Steve Martin is an exception.  He has become a collector of Lawren Harris, the most recognized of the group.1

I am passionate about all of the paintings of the Group, but Lawren Harris’s work (1885-1970) also stands out for me. He was an heir to what became the Massey-Ferguson farm machinery company, and he came up with the name of the group. Harris lived for a period in the 1920s in Santa Fe’s art colony and had a captivating personal life. Like several similar art groups in America, only one woman was tangentially associated with The Seven, Emily Carr (1871-1945), who recorded aboriginal culture in western Canada and is now considered as iconic a figure in Canada as O’Keeffe is in America. But it is Doris McCarthy, who knew and studied with some of the Group of Seven as a young artist, whose place in Canadian art has been unsung. As a gallerist noted in 2008: [Her work] “…provided the link between the Group of Seven and . . . the artists who emerged in the sixties.” He wisely predicted that while McCarthy has been under-recognized, Canadian art institutions and collectors would in the future lionize her work. 2

Born in Calgary, Doris McCarthy was a diminutive dynamo who possessed an incredible zest for life and painting. She had an ability to focus on and to organize any endeavor she attempted   and led by example in every aspect of her life. Independence was her mantra as she practiced art, wrote three exceptional memoirs, disregarded the rule book for aging by receiving an undergraduate degree in Literature in 1989, and was an intrepid traveler and plein air painter. She learned to canoe at age seven when her family moved permanently to Toronto.

As a beloved teacher, she urged the artist “to take art outdoors” as the Group of Seven had done. McCarthy was known not “to suffer fools” yet she gave generously to students, friends, and colleagues worldwide. Many Toronto friends coveted an invitation to her annual Christmas party where she not only set a beautiful table laden with Canadian crafts, but organized a treasure hunt at the gathering in her home and studio. Always a drinker of rye, she paused every afternoon for “Tot Time.”

In 1959 she bought two rustic cottages without running water on Georgian Bay on Ontario’s Lake Huron, where she painted with friends for four decades. Her painting companions remember her as never being still. She was at her pre-planned painting site by 8:30 a.m., having had her breakfast, exercise, and meditation. Upon arrival she would quickly set up and begin to paint, leaving her slower companions still searching for subject matter. During non-painting hours she was cooking, playing solo Scrabble with one hand competing with the other, or working cryptic crossword puzzles. She kept a daily journal her entire life and her cats were treated like family.

Eventually, as doors and recognition opened for women artists in Canadian art circles in the 20th century, McCarthy received practically every prize awarded to Canadian artists, including a scholarship at age 15 to the Ontario College of Art where Arthur Lismer, a member of the Group of Seven, taught and recognized her talents. As a student there, she organized the Art Students League in Toronto. Later, she became the president of the Canadian Society of Painters and Watercolorists and the first woman president of the Canadian Society of Art. In 1974 she was elected to the Royal Academy of Canada, and in 1986, received highest recognition as a member of the Order of Canada. Three years earlier, McCarthy was named Canadian Woman Artist of the Year. She frequently appeared on the Canadian Broadcasting Company and was the subject of documentary films. She painted 5,000 works during her career that are now collected in over 20 museums. She donated her house and studio outside Toronto, called Fool’s Paradise, overlooking the bluffs of Lake Ontario, as an artist residency and retreat now governed by Ontario Heritage Trust. 3

What set McCarthy apart from the other women artists of her time is her 40-year teaching art career at Central Technical School, a vocational high school in Toronto, where she influenced a generation of Canadian artists. During the Depression, at age 21, when she realized that teaching was to be her profession, she received a teaching certificate and never looked back. Under the school rules, if a woman teacher married at Central, she could no longer teach. McCarthy taught composition, design, and other disciplines, always experimenting, deducting, and simplifying her subject. Student testimony of McCarthy’s instructive skills mirror her personality. Her methods were engaging and stimulating for the vocational “toughies” (her words) that she taught. She took analysis of form seriously and taught her students that the relationship of form must be understood.  McCarthy sometimes asked a student to hold an object in his hand behind his back and expected him to draw it without ever seeing it. 4 As she became more experienced in her job, she made lifelong teaching and traveling friends at Central Tech. This young faculty was encouraged to actively exhibit its work in local and national shows, and McCarthy gladly participated.

During 40 years of teaching, McCarthy took two sabbaticals to satisfy her thirst for travel. In 1950 she traveled to Great Britain, Ireland, Scotland, Holland, Germany, Austria, Italy, and France. A decade later she took another sabbatical to Japan, Hong Kong, New Zealand, Singapore, India, Turkey, Egypt, Israel, Afghanistan, Iran, Iraq, and again to Italy, Spain, France, and Great Britain. She brought back these new experiences to share with her students. She rounded out her travel with frequent trips to paint in every Canadian province—especially to Gaspé and Newfoundland. Her late-in-life travels were to Labrador, Crete, Greece, Hawaii, and at age 84 to Ukraine and China!

McCarthy had a modicum of knowledge of the United States. Her family briefly lived in Boise, ID when she was a child, and as a mature artist she visited West Virginia, New York City, Rockport, ME; Gloucester, MA; Arizona, and New Mexico. At age 88 she revisited the American Southwest, touring Taos and Abiquiu, NM, the territory of Georgia O’Keeffe.

Observers often emphasize artist McCarthy’s ability to distill a composition where the distance becomes near in her work. While she experienced the movements of abstraction, color-field, and minimalism, her artistic journey remained landscape. In her mature work she simplified her powerful message by creating daring sculptural forms and adding vivid colors to her palette.  When choosing gallery representation in later life, she selected one that represented the work of ground-breaking younger artists, remarking that she did not “want to be with the old guys.”5 McCarthy once instructed a theatrical group whom she was directing: “Your lines are few. Make the most of them.”6 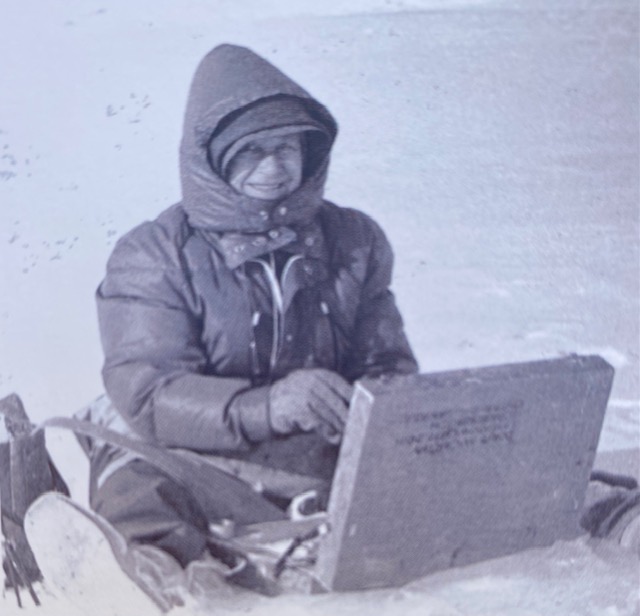 It was only after she retired from teaching in 1972 that her artistic fame rose when she began to paint in large formats. Concomitantly, McCarthy discovered Canada’s Arctic, following in the snow boots of the Group of Seven. Arctic ice floes and mountains became her subject matter. She further reduced ephemeral land and sea forms and reverted to less color range. Her iceberg series of 60 paintings reflect the more well-known ice islands of Lawren Harris, whom she had visited once and discussed his Theosophy insights and spiritual focus. Yet, she likely dismissed his guidance by noting: “My paintings are so legible. I feel guilty.”7

In a CBC Take Thirty segment filmed as McCarthy painted in the Arctic in a 15-below-zero temperature, McCarthy disregarded the weather conditions. While giving her painting demonstration, clad in many layers of clothing and hoods, she casually informed the viewers that she kept her oil paint tubes soft, especially Titanium White, by storing them in her bra.8 Glycerine was added to her water to prevent freezing when working in water media.

Wendy Wacko produced a film entitled “Doris McCarthy, Heart of a Painter,” and highlighted McCarthy’s “outdoor approach,” a method that she herself teaches. Wacko is currently working fervently to place the remainder of McCarthy’s works in the public domain in a western Canadian museum. 9

Near the beginning of the 21st century as Doris McCarthy was moving toward her centennial year, she was bestowed her last award, that of “Artist of Honor” in conjunction with a solo exhibition held at the McMichael Canadian Art Collection outside Toronto that is dedicated to the legacy of the Group of Seven. The museum recognized McCarthy’s legacy: her life-long productivity, her contributions to art development, and the quality of art that she gave to her native Canada.10 Doris McCarthy deserves to be more well-known in the United States. She left us with lessons not only for painting but for a life well-lived:  Your lines are few. Make the most of them! 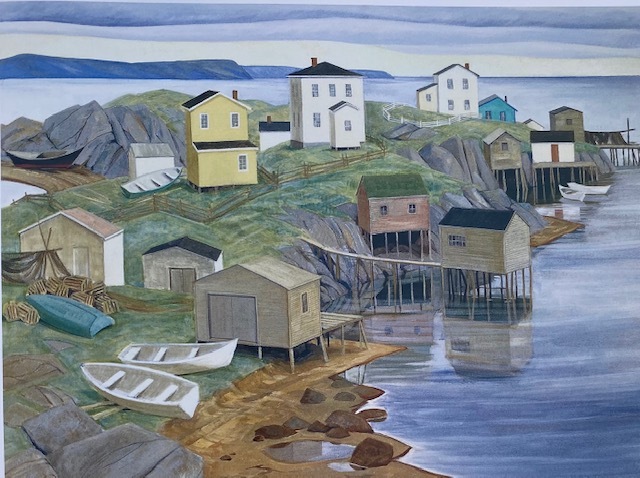 7. Ibid., p. 83 [McCarthy made this remark to Christopher Hume, long-time art and architecture critic for the Toronto Star].

10. The McMichael Canadian Art Collection is well worth a trip. It’s mission now also includes indigenous Canadian art and contemporary art. Located on one hundred acres, it features the original Canadian Seven artist, Tom Thomson’s studio, and 6,500 artworks that include the Group, Emily Carr, and Doris McCarthy.  A sculpture garden and walking trails enhance the ground and the most unusual feature is a cemetery where six of the Group of Seven artists are buried including Lawren Harris.