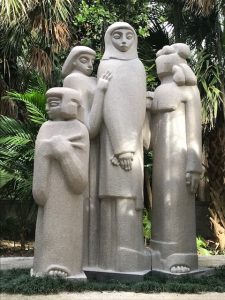 I had not heard of sculptor Ann Weaver Norton (1905-1982) until I traveled in Florida recently and visited her home and gardens in West Palm Beach. My interest was piqued upon learning that she was born in Selma, AL and that later in life she married Ralph Norton, steel magnate and founder of the Norton Museum of Art.

Two books have been written about her in the last decade but very few outside Florida and Alabama have heard of this modernist sculptor. Ann Vaughan Weaver spent her childhood in Selma; her ancestry emanating from three prominent Selma families. Her great grandfather, Phillip J. Weaver, was the first settler in the town and a large land owner in the region. Two paternal aunts shaped her interest in art when at age 4 she began to draw and mold clay. Aunt Clara Weaver Parrish, an important Alabama artist studied at the Art Students League in NY, with William Merritt Chase and in Paris in 1900. Parrish also worked for Tiffany Studios.  Her sister, Rose Pettus Weaver, was a well-known sculptor of wood.

Ann Weaver attended Smith College in MA but did not focus on art. After graduating she returned to Selma intent on becoming a missionary. She soon lost that focus and wrote three successful children’s books based on family plantation life that she remembered as a child. With finances from these publications, she refocused her career on art and headed to New York City in 1928 where she studied at the National Academy of Design for three years. During the summers she matriculated at the noted Grand Central School of Art. She used two Carnegie Traveling Fellowships in 1932 and 1935 to study sculpture in France and England.

When she returned from Europe the second time, she settled in NYC and began to carve sculpture in the manner of John Hovannes who eschewed classical styles and chose ordinary subject matter as his métier.  Weaver also served as a studio assistant to Alexander Archipenko, an acknowledged proponent of cubism. Weaver continued to be influenced by the new movements in early 20th century abstract sculpture including the iconic work of Constantin Brancusi.

She also followed the work of sculptors José de Creeft and William Zorach, each promoting stone carved in a simplified form rather than in a realistic genre. William Zorach noted: “Real sculpture is something monumental, something hewn from a solid mass, something with repose, with inner and outer form, with a strength and power.” [1]

But Weaver made little money from her art, her materials and casting were expensive, and public taste had not embraced newer abstract sculpture, especially that created by a woman. During the late 1930s, she worked on and off in a colony of stonecutters in Newport, RI, but supporting her career in NYC became impossible. As a result, Ann Weaver applied and was hired in 1943 to teach art at the Norton School of Art in West Palm Beach, FL. This dramatic move liberated her from the stress of the NYC competitive art scene and allowed her a personal outlet with steady income to pursue her own style of sculpture.

Ralph Hubbard Norton and his wife established the Norton School of Art in 1940 in their winter home of West Palm Beach. Elizabeth Norton died in 1947 and a year later in 1948, Ralph married Ann Weaver. Norton encouraged his bride to concentrate on her art career rather than on Palm Beach society, and Ann never returned to teaching. Ralph Norton also slowly embraced her love of abstraction and supported her extensive travel and artistic experimentation. Ralph Norton died in 1953 and for the remainder of her life, Ann Norton (her preferred career name) executed monumental sculpture from her backyard studio and located it in her gardens.

By 1955 Ann Norton was traveling the world, first being influenced by a trip to the Southwest where the dramatic landscapes of AZ, NM, and UT influenced her increasing turn to monumental abstract sculpture.  Norton commented that in the Southwest she saw nothing but “figures eroded in rocks.” [2]  For a decade she chiseled pink granite into a group of seven figures, some 12’ high, helped by an assistant who transferred her drawings to the uncarved stone. This mysterious grouping, titled Seven Beings, was to be her last figurative garden sculpture. 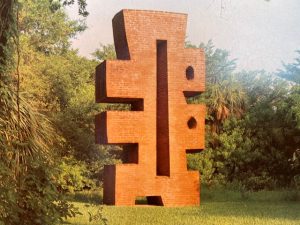 In the 1960s, Norton focused on geometric sculptures, some 10’ in height, carved from imported cedar from the Northwest where she was moved by native totems. These chiseled towers were later titled Gateways.  She continued to travel extensively to England, France, Spain and Italy. Her greatest spiritual travel was to India in 1961 where she met the Dalai Lama and for the rest of her life she supported Tibetan liberation. Returning home, Norton executed a gargantuan horizontal sculpture expressed in undulations, contours and curves (48’ x 12’ x 14’) that necessitated filling in her swimming pool to provide a location for the work. This sculpture, of rare Mexican brick, established her preferred medium of brick for the rest of her career. Her largest and last undertaking was the creation of seven monoliths of handmade North Carolina red brick, strategically placed at the end of her two-acre garden’s canopied pathways. These vertical monuments recall the architecture of Norton’s Selma heritage and she described them as “her biography.” Other influences of rock formations, Stonehenge, and Tibetan chortens have been posited for these late works. Author and O’Keeffe expert, Dr. Barbara Buhler Lynes, who introduced me to Ann Norton’s sculpture, commented that her stark, abstract work “…is a testament to Norton’s daringly innovative exploration of organic abstraction that increasingly informed her work in the 1960s.” [3]

Ann Norton died of leukemia in 1982. The Ann Norton Sculpture Gardens had been established in 1977 before her death and she invited Sir Peter Smithers, a noted British botanist, to redesign her gardens where he introduced rare palms to the tropical climate. Her home, studio, and monumental sculpture greet the visitor today. Listed on the National Register of Historic Places, this resource is not a part of the Norton Museum of Art but is located at 253 Barcelona Street in West Palm Beach. The historic site brochure states: “…Ann Norton’s works in bronze, stone and wood allure the visitor to feel her artistic spirit” and her mysterious sculptures are “to be discovered as surprises amidst the dense, jungle-like vegetation.” [4]  I was exhilarated to find her colossal sculpture; her rare, extant studio; and the successful efforts to preserve Ann Norton’s legacy. 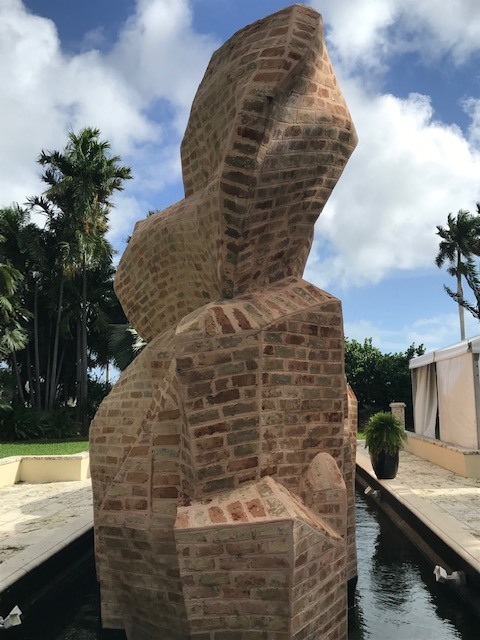 *Ann Norton sculpture is collected by the Detroit Institute of Art, Los Angeles County Museum of Art, High Museum in Atlanta,
Norton Gallery of Art, and Musee Rodin in Paris, among others.