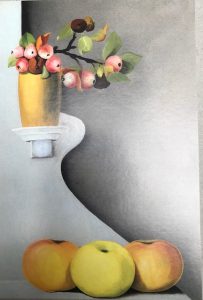 Ida Ten Eck O’Keeffe, Georgia’s artistically talented sister, was unknown to a majority of art enthusiasts until recently. An Ida O’Keeffe exhibition and catalogue organized by the Dallas Museum of Art titled “Ida O’Keeffe: Escaping Georgia’s Shadow” has just closed at the Clark Art Institute in Williamstown, MA. It was reviewed in The Boston Sunday Globe, August 4, 2019, titled “A glimpse of what might have been: a new show gives tantalizing view of Ida O’Keeffe, a little-known talent whose budding career sister Georgia did what she could to stifle,” and later in the New York Times, August 9, 2019. The Globe called Ida “sister to greatness” and the NYT termed the show “…at once sad and inspiring…paying tribute to Ida’s persistence despite little recognition and to her quietly insistent art, some of which survived long enough to be rediscovered.”

Who was Ida O’Keeffe? She was the second daughter of five sisters born to the transient O’Keeffe family in Wisconsin. Georgia was the first-born daughter and received preferential treatment among the seven children during childhood. Each of the sisters received art lessons but after the family’s disastrous financial move to Williamsburg, Virginia, Georgia was the only sibling to receive constant early formal schooling. When the family moved to Charlottesville, converting their home there into an income-producing boarding house, Ida studied education and began teaching in southwest Virginia, eventually receiving her degree in 1917.

When World War I erupted and after their mother’s death, the sisters spread their wings. Georgia had been introduced to Alfred Stieglitz and his gallery support, so Ida joined Georgia in NYC to study nursing, a smart career move that would see her through difficult years in the Depression. When Ida was drawn into the Stieglitz circle where Georgia was already a prominent member, she spent time at the Stieglitz compound in Lake George, New York during the 1920s and became seriously interested in art. She was wooed by the lascivious Stieglitz, but fell in love with two men in his circle: Paul Rosenfield  (1890-1946), an art critic, and later Arnold Rönnebeck (1885-1947), an artist. Neither liaison flourished because Stieglitz’s jealousy undermined Ida’s suitors.

In 1929, Ida entered the Teachers College of Columbia University, a destination for progressive educational curriculum at the time. There, Ida came under the influence of painter Charles James Martin (1886-1955), whose teaching methods emphasized composition inspired by the concepts of Dynamic Symmetry. Ida followed Martin who taught art in Cape Cod’s Provincetown in the summers. Discovering Truro’s nearby Highland Light (house), she adopted it as the subject for her graduate painting requirements. Ida considered the series her artistic breakthrough using Dynamic Symmetry in the same manner of Frank Stella’s and Charles Demuth’s modernist compositions. Ida had begun to exhibit her work at Opportunity Gallery and Delphic Studios in NYC where she received favorable attention.

In 1931 Ida earned a Master’s Degree in Art Education at Columbia, becoming the most educated among her sisters. She received a New Deal commission from the PWAP and also began to create monotypes and other prints. She taught in TN, then at the Valle Crucis School for Girls in northwestern North Carolina. Always linking a personal interest in cultural anthropology to locations where she taught, Ida continued short teaching stints in Alabama, Missouri, New York (receiving summer fellowships at the University of Oregon, etc.) and finally finding a permanent art head position at Lake College in San Antonio, TX. During her peregrine life, Ida and Georgia grew apart as Georgia, supported by then-husband, Stieglitz, informed Ida that there was room for only one successful woman artist in the O’Keeffe family. Ida retorted that “…she would be famous too, if she had a Stieglitz.” [Canterbury, p.65] 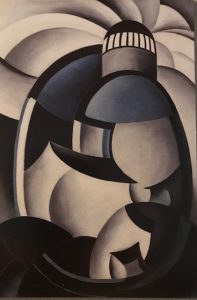 Ida’s last teaching job was founding head of the Art Department at Pembroke State College for Indians, in southern NC. However in 1942, Ida took a job with the Douglas Aircraft Company in CA, quit her NC job and soon moved to Whittier, CA. She spent the remaining years of her life in the Quaker city. By 1943 she had purchased a bungalow with a garden not far from the Whittier Art Association and the Woman’s Club where she became active curating exhibitions and showing her own work, mostly from her old inventory including her early lighthouse series. Close to her sisters Anita and Claudia who lived in CA, she remained estranged from Georgia who by then lived in NM. Georgia kept up with Ida through communication with her other sisters but Georgia never invited Ida to visit her iconic NM home as she did her other sisters.

In 1950 Ida’s health began to fail and all the sisters supplemented her modest income. She died in Los Angeles and her remains rest in Forest Hill Cemetery, Madison, WI. Sister Claudia inherited Ida’s house and possessions but through a convoluted circumstance at Claudia’s own death, Ida O’Keeffe’s artworks were auctioned and soon appeared in thrift shops and at local flea markets around LA.

Author Linda M. Grasso has summed up how Georgia felt about her sister in this sad commentary: “Margarito Lopez [NM], who started working for Georgia in 1980, recalls that when he asked her if he could have one of her paintings, she told him that she couldn’t give one of hers ‘but I can give you this one.’” [note 216, catalogue, p.104]. That artwork was Ida O’Keeffe’s. 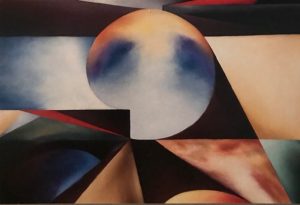 Curator Sue Canterbury dedicated this project to Ida “in the hope that it serves to illuminate her undeniable talent and encourages consideration of outcomes, had her potential been realized in her lifetime.”  Ida’s few known works have recently drawn intense personal and varying reactions. Take a harder look in your local flea markets and thrift shops next time and remember Ida O’Keeffe!

Dynamic Symmetry is a method of composition using ratio grids, triangles, rectangles, and spirals based on Greek art and architecture, developed by Jay Hambidge (1867-1924) who published The Elements of Dynamic Symmetry 1926.