When I began collecting art by American women artists in the 1980s, there were few resources for research. One was awed by a woman artist’s talent but it was quite difficult to find biographical information on her. The situation has slowly changed since three decades ago as women’s art began to take a larger stage, albeit gradually. William Gerdts published a three-volume set titled Art Across America: Two Centuries of Regional Painting 1710-1920. Quickly these handsome 1990 volumes became a disappointment for one like me, wishing to learn more about forgotten women. Divided regionally, one would have expected that the study would include many rediscovered women artists. Yet, in over 1,000 pages, Gerdts only included approximately 75 women artists within the regions of New England, New York, the Mid-Atlantic, the South, the Midwest, the Far Midwest, Rocky Mt. West, Southwest, and Pacific.

After two decades into the 21st century, I am happy to note that many more historical resources are now available to collectors, fellow artists, and researchers on this subject. These works are structured in many forms including national, statewide, and local examinations, the latter centering on a particular city where art flourished.

One of the most recent studies appeared in 2016: Emerging from the Shadows: A Survey of Women Artists Working in California, by Maurine St. Gaudens and Joseph Morsman, a beautiful four–volume privately published series. I have the fortune to know Joseph Morsman, and he has graciously gifted this four-volume set to the American Women Artists organization.  The study began as a selection of 100 California women but soon morphed into 320 featured women artists. Their artwork is showcased with dazzling illustrations and contextual information related to their careers. Morsman and I compare our similar journeys in search of largely forgotten women artists; paths that have led us to courthouse records, cemeteries, obituaries, local libraries and cultural associations, online ancestry guides, and any other avenue that might reveal biographical background. We have both found numerous family members who have been excited to help us with information, but Morsman relates that critical records have been lost by local arts organizations that have not realized their importance. St. Gaudens became involved in this project because as a fine arts conservator, she began to be asked by owners of unknown or family-held women’s work whether she had any information about her artists. Joseph Morsman entered the scene in 2010 and expanded the scope of the survey to include printmakers and sculptors. There were so many uncovered artists during this project that the publisher called a halt when the survey hit four volumes! 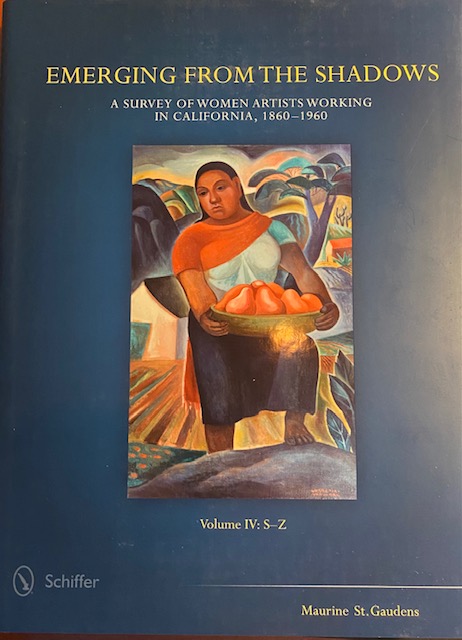 In a recent conversation I asked Morsman what our contemporary American women artists readership might gain from studying these early California women artists? He emphasized: “These women were accomplished artists, not Sunday painters or china painters.” 1 While this survey is limited to California, many of these women migrated from other parts of the country  and have also arrived from every part of the globe, including those of Japanese, Latin and European descent. Morsman credits an early survey,  An Encyclopedia of Women Artists of the American West by Phil and Marian Kovinck, 1998, as a resource for biographical information for these volumes and an even earlier 1988 source by Chris Petteys, Dictionary of Women Artists:  An International Dictionary of Women Artists Born Before 1900, as a useful research tool.

Another exciting survey appeared in 1995, titled Independent Spirits: Women Painters of the American West, 1890-1945, edited by Patricia Trenton, in conjunction with the Autry Museum of Western Art. Noted scholars provided rich context to the lives of this regional cadre of women artists, abundant names that are familiar. Widely circulated, this book became a much-used resource. Ephemera and photographs lend essential visuals to the thoroughly researched essays on women artists. The book includes talented women who headed college art departments who shaped these women artists’ careers (another overlooked subject that careers needs further study).

Moving to the Midwest, the Indiana Historical Society Press produced Skirting the Issue:  Stories of Indiana’s Historical Women Artists, Judith Vale Newton and Carol Ann Weiss, 2004. This volume emphasizes the rise of the Arts and Crafts Movement in the early 1900s that first gave women in the state a voice in the visual arts. As it notes, the 1893 World’s Columbian Exposition in Chicago sponsored a Women’s Building that inaugurated women’s art to a fine arts platform.2 A study of Midwest women’s art could not be complete without a discussion of the John Herron Art Institute in Indianapolis and the Hoosier Salon, an annual juried exhibition begun in 1925 in Chicago but moved to Indianapolis in 1942. Many women artists received their first professional recognition in the Hoosier Salon that continues today.

In Cleveland, Ohio, a club devoted to women’s art was established in 1912 as women sought opportunities to exhibit their work after being excluded from male counterparts. An important book, A Great Joy:  The Women’s Art Club of Cleveland, Marianna Berardi, was published in 2014 that heralds the club’s history until its end in 2006. I discovered this publication while researching little-known artist Louise Morris (1896-1971), who, with her sister, owned and managed their own studio in the city. Morris spent years researching the northern Wisconsin native cultures and then discovered New Mexico and the Southwest in 1931, which became her passion for the rest of her artistic life. Regrettably, scant biographical information is available on her today.3

Moving on to the East Coast, one finds many more studies of mostly forgotten women artists because art museums, organizations, educational opportunities, summer art colonies, and a plethora of other cultural platforms were established earlier and became the springboard for women artists’ advancements. The City of Philadelphia is a good example of a colonial city that fostered the work of women artists well before other parts of the country. The Pennsylvania Academy of the Fine Arts, established in 1805, is an example of a noted museum and art school that accepted women into its ranks as early as the 1840s. Never mind that Philadelphia’s most famous artist, Thomas Eakins, a teacher at PAFA, was fired for admitting women artists into his life class with male models in 1886.

Later, in the City of Brotherly Love, a group of thirty Philadelphia women artists, all trained at Philadelphia art schools, organized in 1917 in order to show their work in a controlled environment with a limited number of members set at 30. They called themselves The Philadelphia Ten, a moniker coped from famous male groups: Ten American Painters, the male impressionists in New York; and The Eight, later labeled the Ash Can School. Five women were instrumental in founding the group including Mary-Russell Ferrell Colton (1889-1971), who with her husband later moved to Flagstaff, Arizona, where she was instrumental in establishing the Museum of Northern Arizona in 1928 and was one of the first six women inducted into the state’s Women Hall of Fame.4  Another member of the group, Theresa Bernstein (1890-2002) spoke at the anniversary exhibition of the group at Moore College of Art and Design in 1998. I had the pleasure of hearing Bernstein, age 102, speak that night. During her long career, Bernstein was known for “painting like a man,” and I vividly remember her remarking “I was trouble” as she recalled her career struggles. Her real age was never established as acknowledged in her New York Times obituary that quoted her: “I’m old enough to keep it to myself.”5 The Philadelphia Ten disbanded in 1944 with no documented explanation, yet the group survived World Wars I and II, the Stock Market crash, and the Great Depression. Moore College of Art and Design, in conjunction with the American Art Review Press, published a lasting record of this important women artists’ in 1998: The Philadelphia Ten:  A Women’s Artist Group: 1917-1945, Page Talbott and Patricia Tanis Sydney. 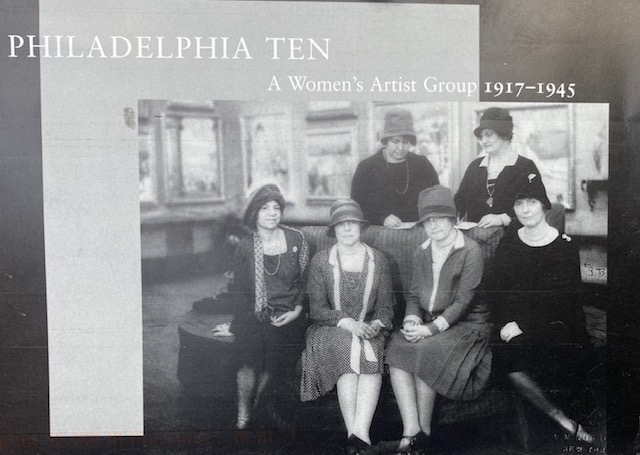 Another book that focuses on the Philadelphia art scene was published in 2000 by Henry N. Abrams, The Red Rose Girls:  An Uncommon Story of Art and Love. Author Alice A. Carter, the daughter of a well-known illustrator, wrote about these three women artists/illustrators, with a friend, who lived and shared studio space in an estate called Cogslea on the Main Line. These artists were Jessie Wilcox Smith (1863-1935), Elizabeth Shippen Green (1871-1954), and Violet Oakley (1874-1961), who had all met while studying with the great American illustration teacher, Howard Pyle, at Drexel Institute in Philadelphia.

Before leaving Philadelphia, one must recognize several other significant women’s art communities:  The Plastic Club at 247 Camac Street is considered to be the first women’s art club in America, established in 1897. When mid-Atlantic women artists found no place to meet, they established this social and exhibiting club that continues today. Philadelphia women artists were also major players in the founding of the Fellowship of the Pennsylvania Academy of Fine Arts in 1897, the Philadelphia Art Alliance in 1915, the Philadelphia Society of Etchers in 1927, and the Color Print Society in 1939. Regrettably there have been no scholarly histories written on these above pioneering women’s organizations, either singly or as a whole.

Moving up the East Coast, the New York arts organizations and societies that were early populated by women artists are too numerous to discuss here but warrant consideration. I wish to turn, rather, to women artists in the Boston area, another city that early embraced women artists in the late 19th and early 20th centuries. Two seminal books were published in 2001 that treat the rise of professionalism and business practices by women artists. At Home in the Studio:  The Professionalism of Women Artists in America, Laura R. Prieto, Harvard University Press, analyzes how women artists used their newly independent status in the early 20th century, with more education and freedom, to establish their own identity through their own spaces. Kirsten Swinth, in Painting Professionals: Women Artists & the Development of Modern American Art, 1870-1930, 2001, The University of North Carolina Press, discusses women’s artistic paths, many in Boston, who eschewed feminine labels and finally in the 1930s became fully a part of the modern art movement in America. (Note: if the reader is looking for a light discourse, neither of these books is your cup of tea.)

If one tires of discussion of early American women artists, a final book is recommended that came out recently and has been widely embraced:  Ninth Street Women:  Lee Krasner, Elaine de Kooning, Grace Hartigan, Joan Mitchell, and Helen Frankenthaler:  Five Painters and the Movement That Changed Modern Art, Mary Gabriel, Little, Brown and Company, 2018. I have spoken to no one who has read this book who has not reveled in it. Finally, here is a look at mid-century American women artists who found their rightful place in the spectrum of 1950s Abstract Expressionism amid the giant male figures who dominated the movement. I readily admit to joining Helen Frankenthaler’s fan club when reading about her. Lesser–known women artists like Nell Blaine and Jane Freilicher are also given recognition.

Well, these books dominate just one of my library shelves but each of them has helped me to more fully understand the American woman artist in the context of our American art history. I remind you that the holidays are approaching. 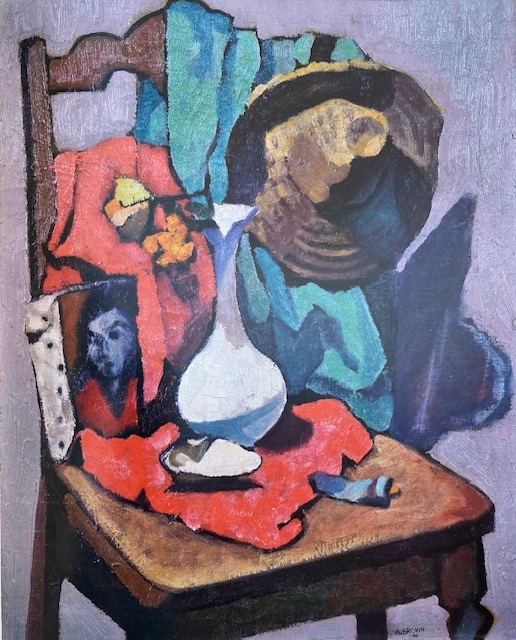