Anticipation had built for weeks.  We arrived at Lois Dodd’s for tea a minute before our predetermined hour of 2 pm. Lois Dodd is an artist who has long painted in Maine and was one of the key women artists working in mid-twentieth century New York over seventy years ago. Dodd’s wee ‘infamous’ house sets directly off the road a mile away from the Olson House that is associated with the famous Wyeth family of artists. Across the road down a grassy field is Christina’s burial site, as well as recent arrivals, Betsy and Andrew Wyeth. This meadow is known throughout the world because of its depiction in Andrew Wyeth’s most famous painting, Christina’s World.  I doubt if Lois Dodd has ever visited this site.

Lois came to the foyer entrance to her small worn-shingle house so typical of Maine and greeted us with ebullient and smiling eyes.  One was immediately drawn to her as she was dressed in a stripped summer jersey shirt, khaki pants, and ankle-high boots.  Temperatures were nearing 100 degrees. August in Maine. 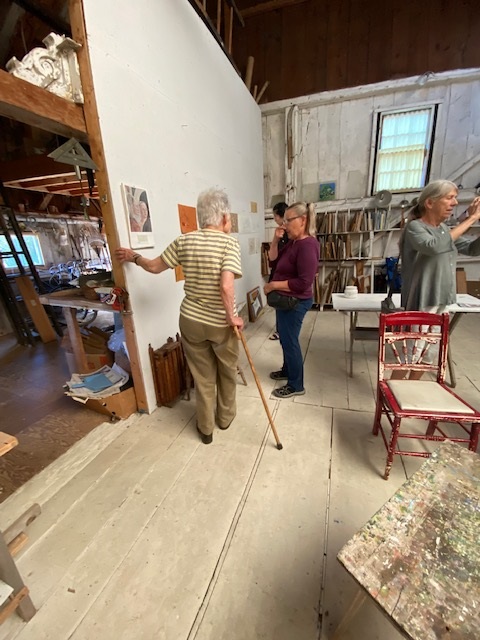 In a gaggle, we turned left into her modest kitchen that looked like it had not changed since the 19th century and where the Brookline wood stove appeared to be the hub of her summer activities. A very large container of Quaker Oats oatmeal rested on the stove shelf in bright contrast to the dark, patinaed surface where oils and vinegars were also lined up.  I quickly noticed her kitchen floor that had been “drip” painted like another of her earlier compatriots and I commented that her floor was better than Pollock’s paintings.

I don’t know if she heard my opinion because she is very hard of hearing and constantly cups her hands to her large ears, hoping to understand words better. Next, we were ushered out to the deck on the back of her house.  A table was set with cups and a red tea pot resting on a table cloth of fetching black and white modernist design. Bill, the gentleman that he is, carried several chairs from the interior out to the long deck.  Some of us sat on the bordering deck bench. Before we walked out to the deck a single, old seasoned chair was already there, positioned stage-like perhaps for a future painting.  This time-worn chair had been painted ochre yellow or maze, that echoed the same yellow hue often used in contrast to the abundant greens that Lois uses in her plein air landscapes. I asked her if she had painted the mellowed chair and she said yes. The Chinese student with us had unsparingly brought an array of authentic Chinese desserts wrapped in typically festive foils.  The HOT tea was poured in a triple-digit atmosphere.

The focus of this organized visit was a reunion of sorts for two women who had taught alongside Lois in the art department of Brooklyn College beginning in the 1970s. It had been a golden time in the department when several future well-known artists including Phillip Pearlstein and students such as Jimmy Ernst were at, or taught at Brooklyn College. Janet Carlile, printmaking professor, had brought along a presentation box (made by architect, Peter Phillipps, who taught with them) of prints made by printmaking students in the 1970s. As expected, these prints elicited memories and recall of that creative time at the College.  Lois commented that she had not enjoyed the administrative responsibilities required for teaching but that she had loved her students and the camaraderie among the artists/staff. Bill Nye had also brought along a portfolio of prints by women students that he had bought at the time at Brooklyn College, encouraged to do so by his friend, Janet Carlile. This discussion with many interesting divergent paths lasted an hour or so in which I came closest to fainting from the oppressive, silent heat, than any other time in my life.

Then we turned to our edible treats that engendered less formal conversation. Lois sat comfortably in her old yellow chair and agreeably engaged with us for the next hour.  With this shift, I was free to ask Lois a few “art history” questions.  My first question was: “Lois, you have had a long, distinguished career, having come with your husband, Bill King, along with Alex Katz and Yvonne Jacquette to the Skowhegan School of Painting in Maine over a half century ago and you are considered a key member of the avant-garde artists working in New York in mid-20th century.  You have attained fame for yourself and your art. How do you feel about your recognition today?” Without hesitating and with no self-effacing or lofty words so typical of artists, Lois answered quickly with an amused smile, “It’s Great!” and we all joined her in laughter.  Lois Dodd has accepted her elevated station with knowledge that she has earned it and has no problem embracing her success. 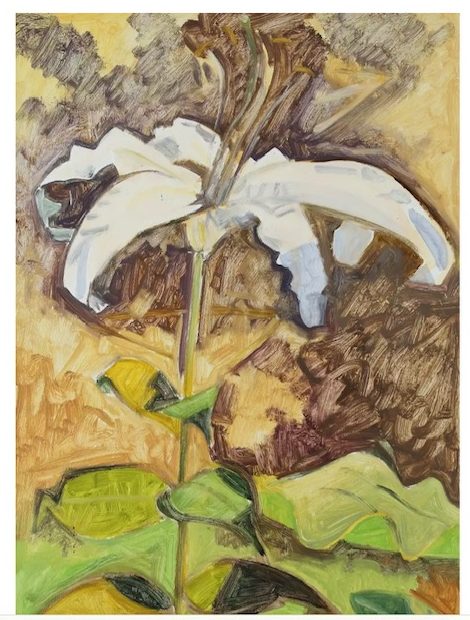 A small gallery in Rockland, Maine, Caldbeck, represents Lois but her primary gallery is in New York City, the Alexandre Gallery.  Most of her work sells for well over $20,000. Her small oils on board capture her familiar surroundings at her summer eerie.  In fact, I sat on that deck for two hours observing an outhouse, a downward-leaning chicken house, her iconic clothesline, and the edge of her barn studio.  A well-manicured, mown-path down the hill led to her son’s hidden summer cottage on Penobscot Bay waters, all backdropped by the towering conifers that often ground her paintings. Simply put, I was sitting IN a Lois Dodd landscape.

I posed a second question by asking: “Lois, any art afficionado visiting Maine who hears about the location of coastal Cushing immediately thinks of the famous family of artists nearby. Have you known the Wyeths through the years?”  Dodd shrugged slightly and thoughtfully hesitated before she answered: “No, they are a different kind of artists.” She remembers only one instance in which she socialized with Andrew and Betsy Wyeth when she had attended a party given by the convivial wood sculpture artist and neighbor, Blackie Langlaise (1921-1977) whose work mirrored his wild and beloved personality. Blackie Langlaise had attended the Skowhegan School of Painting where Lois had accompanied her husband and the covey of artists including Alex Katz and Red Grooms who are now referred to as the Slab City painters. 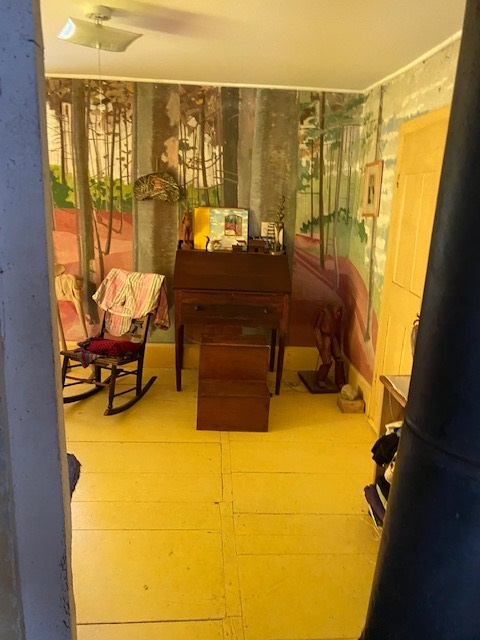 In ending our time on the deck, I asked Dodd to sign my copy of a book titled A First Light:  Two Centuries of Maine Artists – Their Homes and Studios in which she is included.  This book was introduced by Walter Smalling, my friend and renowned photographer of historic architecture. I opened this handsome book to the pages devoted to her. She signed her photograph with a ballpoint pen that I will treasure. And, Dodd became mesmerized because she had not seen the book. She was more interested in the other artists included in the book and I surmised that she wished for a longer, quieter time alone in order to devour its pages.  Hopefully Amazon quickly delivered that book to her.  The book was released in 2020 at the beginning of Covid and never received timely press releases and book signings. 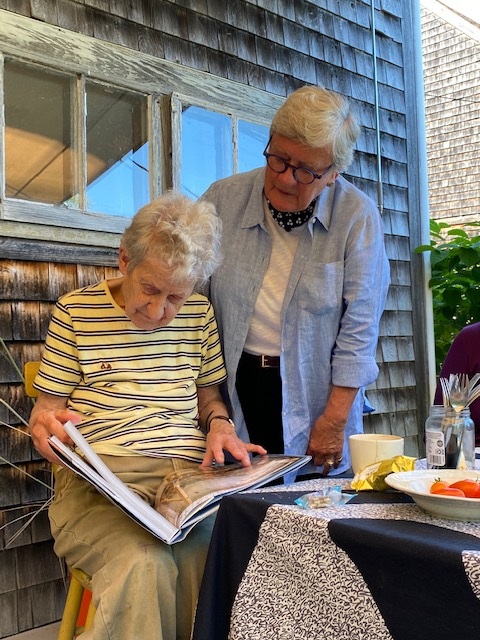 Lois then asked if we would like to see the other rooms in the house-not ordinary rooms-but two rooms, one a bedroom, where she has painted full wall murals, bringing the outside in, scenes captured in her noted bright yellows and greens. These murals delight the eye and appear as trompe l’oeil paintings that incorporate her actual two windows framed by bright yellow curtains. We also toured the other rooms, a sitting room filled with small, randomly placed paintings adorning the walls and an occasional collected work like an etching by Peggy Bacon. A window-filled rounded room has been added to the house which Lois uses as a studio and where she is often photographed.  A painting in progress was mounted on an easel. Her palette rested nearby.

Our last invitation was to enter her barn studio also frequently captured in photographs. The interior walls are white-washed and while her inventory was low, small landscapes in green and yellow oils on board rest on the structural shelves that line the wall.  I coveted a depiction of a small girl on a bicycle. On a high table lay her sketchbooks, small in size, and I caught myself before I unconsciously opened one.  One interior wall was draped with cloth as a backdrop for life drawing.  Lois indicated with a twinkle in her eyes that her barn art sessions necessarily ended several years ago because “My barn was too close to the public road!” [Dodd recently completed a series of nude women working at several manly tasks titled “Working Women and the River” at the Caldbeck Gallery.

Perhaps the most endearing moment of our visit was when the student, Shuyang Zhou, timidly approached Dodd as we were leaving the barn and asked if Lois would critique her figurative work. The rest of us exited the 110 degree-barn space and left the artist and student alone to discuss the work. That critique lasted at least fifteen minutes, despite Lois having been in the spotlight for nearing three hours.  As the two emerged from the barn, the fledgling student appeared stunned by the gracious and positive response that the artist had had to her work.  A very promising artist, Zhou smiled having just experienced moments that will remain with her the rest of her career.

We six were joined by Lois and stood in her side yard for another period taking photographs and saying goodbye.  I have two photographs of myself with Lois which I will prize. The two of us are amused by something said. As she left us, she quietly re-entered her little house by the road. 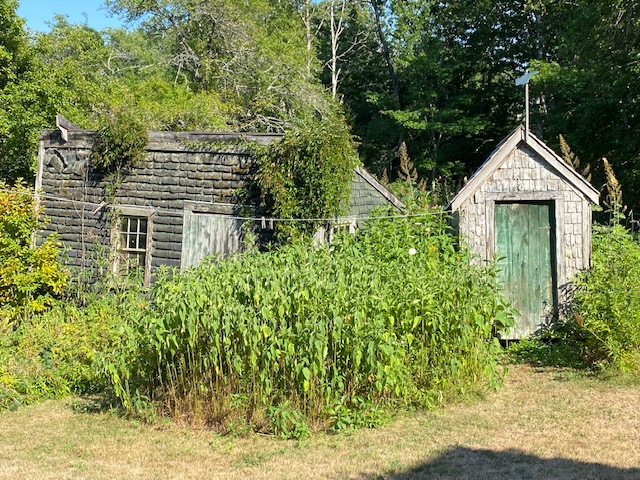 Lois Dodd’s backyard with iconic buildings she has painted.

The entire experience was magical-a friend aptly called it ‘epic’. I have admired her “observational plein air landscapes” for years, listened to her interviews, and followed her gallery career—never expecting to spend an afternoon in her company, surrounded by her actual bright summer landscapes. It is a privilege to now know Lois Dodd. 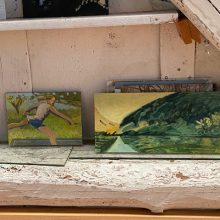 Small Dodd paintings lined up in her studio 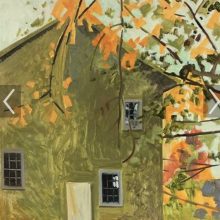 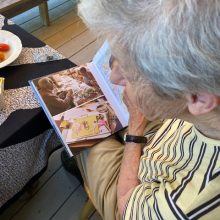 Dodd studied at the Cooper Union in New York City from 1945 to 1948. She was the only woman founder of the Tanager Gallery which was integral to the Greenwich Village avant-garde art scene in the 1950s when leading mid-century artists began running coop galleries. She exhibited there for a decade and moved in 1969 to the Green Mountain Gallery until 1976.  From 1971 to 1992, Dodd taught at Brooklyn College and at the Skowhegan School of Painting and Sculpture in Maine, where she served on the board.  She has had over fifty solo exhibitions.  She is an elected member of the American Academy and Institute of Arts and Letters and the National Academy of Design. She returns seasonally to subject matter—usually in one plein-air sitting-in Maine, New York City, and the Delaware Water Gap. Wikipedia/en.m.wikipedia.org