I Need to Stray Off the Beaten Path 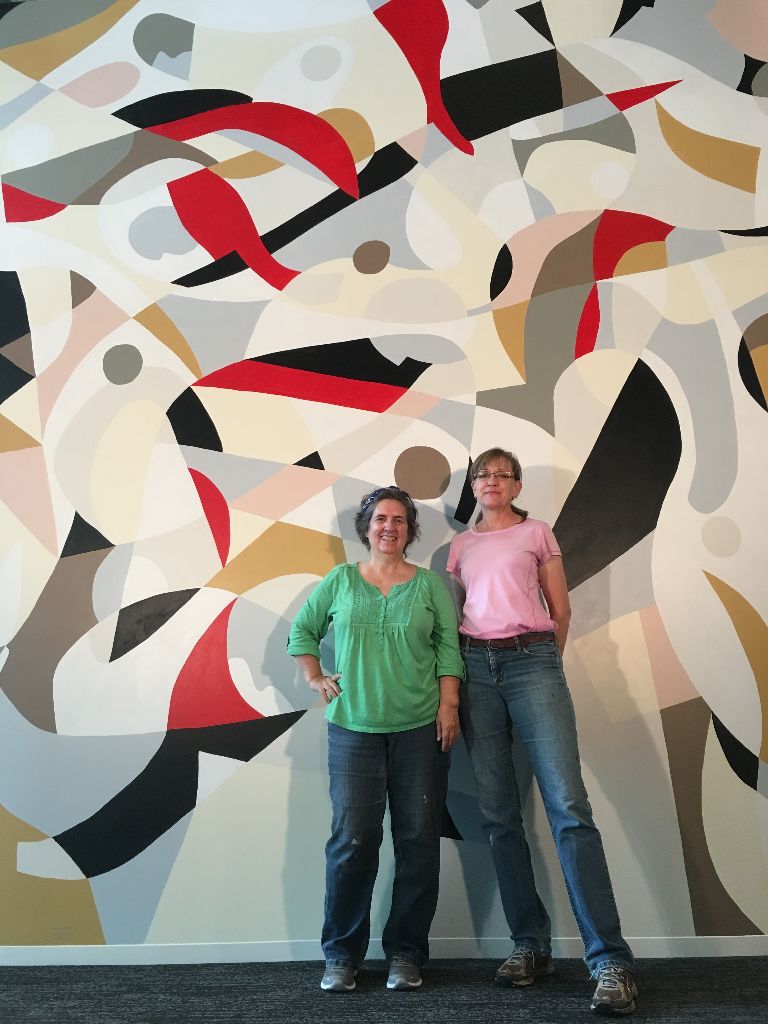 I am thrilled to be one of the new members of American Women Artist. My development as an artist probably rings similarly with many of you. I have drawn since I could hold a crayon, I was my school’s “artist” drawing for the school paper and the yearbook; I went to college and studied art. I have worked commercially, exhibited in galleries even won a few public art projects but I have not yet bridged that threshold to proclaim that ’I make my living as an artist’. Always my goal. I can tell you that at age 58 I am happiest when I am painting. That’s me in a nutshell but what I really want to share with ya’ll is one of my ongoing struggles as an artist. I think it’s something we may have in common?

I once told an old boyfriend that he was like a wildebeest. He was going on about his wife, a really cool person, and I realized his complaints were the same ones he used to say about me. I interrupted his monologue and said, “you’re such a (insert four letter word) wildebeest. Every year you walk down the same trail, cross the river at the same point, scratch your ass on the same tree trunk. Take a step to the left. Or maybe take a step to the right. You’re the problem and only you can change the things you’re complaining about.” As soon as I said it, I realized the statement fully applied to me and my art.

It’s important for me that my work evolves. I’m not the same person I was at 25. I have been influenced by life’s experiences bolstered now by the kind of confidence that only comes with age. But change is a slow almost painful process for me. I mull and consider change in my head for months sometimes years before it begins to show in my work. It is as if I need to resolve the problem in my brain before my mind’s eye can translate and make my hands function the way I wish. 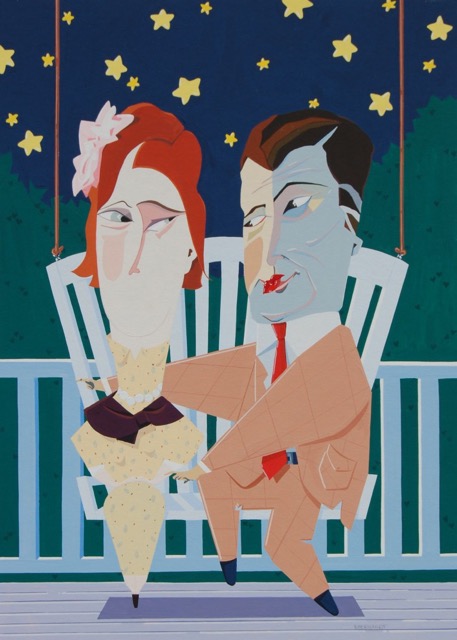 Two of the earliest changes I made to my work were 1) the elimination of facial features because I thought them distracting and 2) painting figures with colors that did not identify with race (we’re all equal so…). I strove to make my figure’s simple, but my compositions were busy, and I made heavy use of patterns. 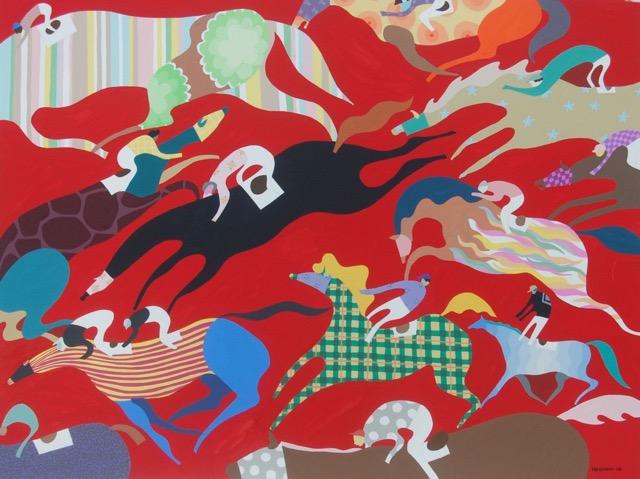 Skip ahead a few years and all that pattern was wearing on my last nerve. I considered the next big change for over a year then finally made the leap. No more pattern. My figurative shapes became simpler composed of only 3-4 elements. Ah, that felt good – for a while. 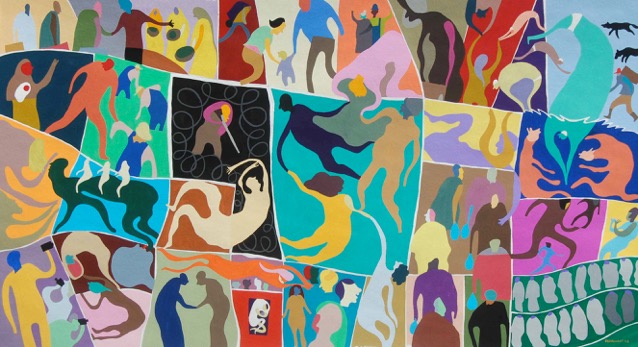 I wanted things simpler and I started to think about how to translate my figurative work toward abstraction. It is no exaggeration that I thought about this for a decade. I have sketchbooks full of doodles, but they were nothing more than scribbles. I could not wrap my head around how to move my work in this direction. Then I had an idea to do a piece about the running of the bulls in Pamplona, the men running in white with a bright red waist sash chased by the dark colored bulls. I sketched out a composition and hug it on my wall. I hated it but wasn’t going to let it beat me. When I get stuck, I pin the piece to my wall and stare at it until my issue resolves. That sketch hung on my wall, tormenting me longer than any other sketch before it – 6 months. Then I finally knew how to finish it and it became my first, albeit tentative, piece toward abstraction. The running bull figures were erased replaced by simple horn shapes and the figures were overlapped to disguise the individuals into one running mass. 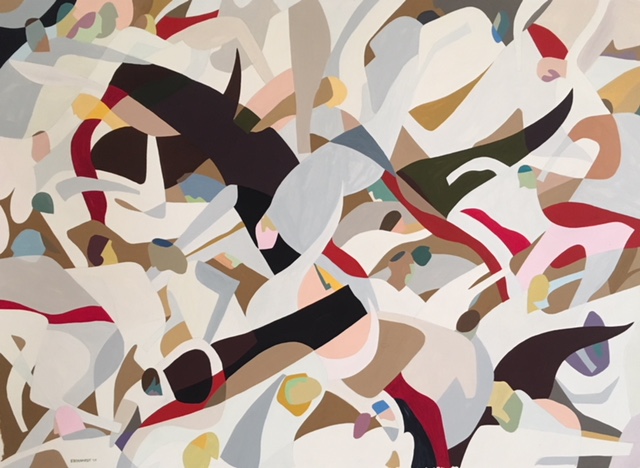 “Running with the Bulls,” gouache by Melanie Eberhardt

This piece liberated my head and has allowed subsequent work to wander more confidently toward abstraction. My work will always be structured around the figure, I like painting people. I will continue to explore how my figurative sensibilities can be abstracted at least until something else begins to nag in the back of my mind calling for something different. I recognize that I am a wildebeest walking a path set before me since birth. I can only be an artist, period. This wildebeest however wills herself to step to the side once in a while to try something new. How many other artist members of AWA struggle with change? How many other wildebeest wander amongst us? 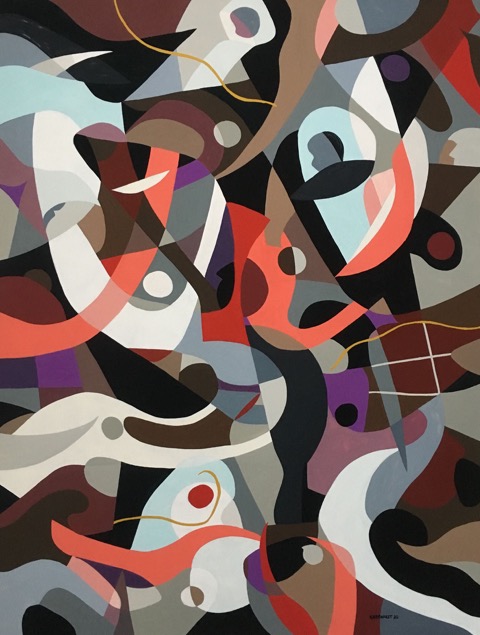 p.s. What happened to that old boyfriend? Never saw him again.