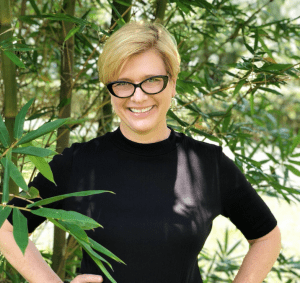 AWA Signature Member Kim Minichiello is one of several members whose creative past includes stints with Disney (as well as members Laurie Stevens, Ellen Woodbury, Heather Lynn Gibson). Kim studied Environmental Design at Purdue – which she describes as a degree in interior design with an emphasis on architecture – leading her to work in Indiana. She spent five years focused mainly on commercial design for offices, hospitals, and restaurants. However, Kim’s early life included drawing, painting, and sewing. She said, “I knew I had more creativity in me and needed work that would be more creative.”

Kim decided to research Disney, which was in the design phase of its Disneyland Paris park (then known as Euro Disney). She sent in her resume, which fortunately crossed the desk of someone that noted a mutual design interest, who then summoned her to California for an interview. She said, “And the rest is history!” Although Kim was told in her interview that she would be working from California, she said, “Three months later I was sent to Paris for six months for the planning process.” After returning to California for a year, Kim was sent again to Paris to supervise the field installation of Disneyland Paris.

Kim met her husband-to-be, who also worked at Disney, after her second Paris assignment. They were married in California soon after. She continued to work in the architectural division of Disney’s Imagineering Division, where Kim designed and oversaw the construction of shops, restaurants, and attractions. After their daughter was born, they decided to transfer to Florida. “We felt it was a better environment to raise a child,” Kim said.

Although Kim chose to leave Disney in the mid-1990s, she has continued to do freelance work—teaching painting workshops for Walt Disney Imagineers and illustrating menus for the various restaurants at Disney parks. She wanted the freedom to do her work from home, including creating wearable art and decorative fabric designs for the home. She was also designed children’s clothing, and partnered in an art licensing digital design firm. Kim said “After seven years of computer design, though, I wanted to get a brush in my hand again and get back into oils… but I also had a strong desire to sketch en plein air with watercolors. I became comfortable with the medium through travel journaling and fell in love with it!” She added, “I live and breathe art!”

Disney, however, was not finished handing out overseas assignments. Kim and her family then moved to Hong Kong for a year and a half to enable her husband to plan a project for Hong Kong Disneyland. There Kim exercised her desire to paint and enjoy the new environment with their then-middle-school-aged daughter. Following Hong Kong, they found themselves once again in Paris.

After returning to the States and joining several artists’ organizations, hoping for opportunities to teach workshops and jury shows, Kim said, “To be honest, the environment is pretty much the same in most other organizations: 70% are always men, and men get more opportunities, which aggravated me. I’m so impressed with the mission of the group (AWA), I just wanted to be a part of it.” Although Kim has Signature status in three other organizations, she said, “Obtaining this designation with AWA is very meaningful to me.”

The June AWA show at the Steamboat Art Museum was the first of the 25 in 25 shows Kim has attended. She considers it an honor to be in the Steamboat show along with artists whose work she has loved and whose careers she has followed for years. “To be honest, I was a bit star-struck. Carol Swinney! Nancy Boren!” she said, “It was so much fun, and the women were so supportive. I want to come to all the AWA shows, whether or not my work is in them!”