In a small museum in a tiny Gold Rush mining town nestled into the foothills of far Northern California, you may be surprised to discover a collection of Early California Impressionism, including many paintings by women artists of the era. The 98-piece collection is displayed in a county courthouse dating from 1855, part of the Shasta State Historic Park which comprises a good portion of the present-day town of Shasta (population 1,771). It is the only art museum in the California State Parks system.

How did this unique collection come about, you might be wondering?

Mae Helene Bacon arrived in Shasta in 1871 as a child of 8, sent from Missouri to live with her uncle, Williamson Lyncoya Smith (after whom the gallery is named). In 1900 she married Angus Boggs, a miner, inventor, and owner of a salvage business. Mae started a new life in San Francisco, becoming involved in the Women’s Suffrage Movement (culminating in securing women’s vote in California in 1911). She also led efforts to establish San Francisco’s Aquatic Park, was a founder of the Club Women’s League, and was a member and resident of the Women’s Athletic Club.

Mae became an avid organizer of the Pan-Pacific International Exhibition, and in gratitude for her work on the Exhibition, was gifted with artworks that had been on display. It is possible that these artworks constituted the beginning of her extensive collection. Artists from the Bay Area and Monterey became friends and, always a supporter of women, she added their paintings to her collection; in fact, paintings by women constitute almost a quarter of the entire collection. Books and Native American artifacts also attracted Mae’s attention, and she compiled large collections of both.

In the 1930s Mae revisited Shasta, and, inspired by the desire to preserve the historic mining town, she began buying up available lots and buildings. She donated them in their entirety to the State of California, which agreed to make the town a California State Park. Upon completion of the courthouse restoration, Mae donated not only her art collection, but furniture, books, and historical documents. Pieces from this collection have been loaned for other museum shows, recently to Sacramento’s Crocker Museum for its Euphemia Charlton Fortune exhibition.

Mae formally donated her collection of Native American objects on loan to the deYoung Memorial Museum in San Francisco. She had been asked to donate her art collection to the deYoung, but responded to the request: “… as I had placed my collection of California Indian baskets there in February, 1903, decided that as Shasta, shrine of the pioneer Masonic Lodge and most important city in the north, had become an ‘orphan Annie,’ (I) would use my efforts there, and am still on the job.”

In honor of Women’s History Month, on March 31 Shasta State Historic Park docent Sue Lang led “A Tribute to Women Artists” tour at the Courthouse Museum showcasing the 14 women artists of the Boggs Art Collection. Sue related a story about Mae’s 100th birthday celebration, at which an ambulance had been in attendance in case of emergency. Mae, always up for a challenge, demanded “Take me for a ride!” Mae Helene Bacon Boggs died in 1963 following her 100th birthday.

– Article by Aleta Carpenter, Vice-President, AWA Board of Directors 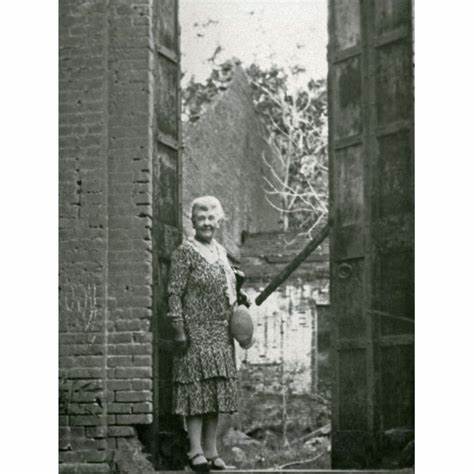