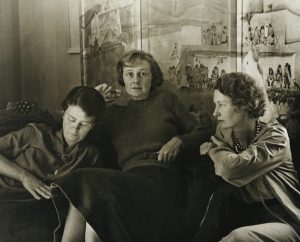 Sisters Margaret, Helen, and Esther Bruton make up a remarkable story of California-born siblings and artists who worked prolifically from the 1920s to the 1970s. “It is impossible to write about one without the others, as they singly and collectively contributed to the cultural life in the Bay Area (San Francisco),” [1] one observer has written. I was first introduced to these sisters’ artworks through my interest in unsung women working in parity alongside male artists in President Roosevelt’s New Deal programs during the Great Depression. Serendipitously, I was introduced to Esther Bruton (Gilman’s) mosaic work at a ranch home in California. As I read more about these familial artists, I was amazed by their artworks. 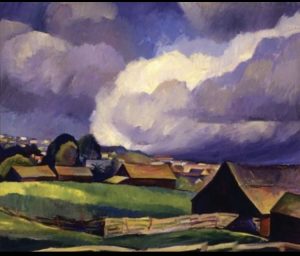 The sisters grew up in Alameda, CA, and worked in an “old-fashioned female ‘refuge’ with an attic studio.” [2] Margaret (1894-1983) was born in Brooklyn but arrived in CA when she was two years old. She attended a local high school, like her sisters, and began formal art training with Frank Van Sloun at Mark Hopkins Institute of Art in San Francisco in 1913. She moved to New York in 1918 to study at the Art Students League with Robert Henri and Frank V. DuMond. The oldest sisters did “war work” in CA during World War I. In 1925 the three sisters traveled to Europe to study art in England, France, and Italy, and Margaret stayed on for a year to study at the Académie de la Grand Chaumière in Paris. When she returned in 1926, she had her first solo show at the Beaux-Arts Gallery in San Francisco where all three sisters later exhibited. Margaret is known for her figural and landscape paintings, graphics, and later, fresco and mosaic murals. She and her sisters were active in the California Society of Etchers, the Club Beaux Arts, the San Francisco Society of Women Artists, and the San Francisco Art Association. 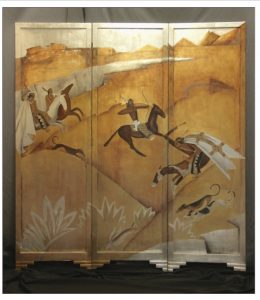 Esther Bruton (1896-1992) joined her sister in New York and from 1917-1918 studied with George Bridgeman at the Art Students League and commercial art at the School of Fine and Applied Arts. She became an illustrator for Lord and Taylor department store but returned to CA to work as an I. Magnin fashion illustrator. She too studied in Paris and spent time in Tahiti. Ester was the only sister to marry, in 1941, to Carl Gilman, a civil engineer who shared her many artistic passions. She is credited with the most dazzling and existing commission by the sisters, the Cirque Room at San Francisco’s Fairmont Hotel, the first bar to open in 1933 after Prohibition. The youngest sister, Helen (1898-1985) attended the University of California, Berkeley, for a time, first studying sculpture but later turning to printmaking. In 1920, she followed her siblings to New York to study with Stirling Calder and Leo Lintelli at the Art Students League. After the sisters returned from Europe, they traveled with their mother on painting trips to Taos, NM, and Virginia City, NV, where they recorded Native American and western life. Helen eventually moved to Monterey, CA. The family had built an adobe house on Cass Street in 1924 and Margaret and Helen moved there permanently in 1944. [3] Helen was first hired to produce ceramic tile mosaic panels featuring famous philosophers for the Mudd Memorial Library at USC-Los Angeles. The sisters soon thereafter began work for the Federal Works Project’s public arts programs and executed mosaic murals for the San Francisco Zoo in Fleishhacker Park. In an oral interview regarding their work for the WPA, Helen remarked: “…we were always interested in trying new techniques…when one would start something we would all do the same thing.” [4] According to Sarah Burns, the sisters worked in every available medium, from easel painting, fresco and mosaic murals, to ceramics, etchings, woodcuts and linoleum blocks. Burns quotes an LA critic’s assessment of their joint work: “…its immediate impression is on the score of the intelligent, order, and clarity….all staked on clean, modern methods of working on color and tones that are definite…. [5] 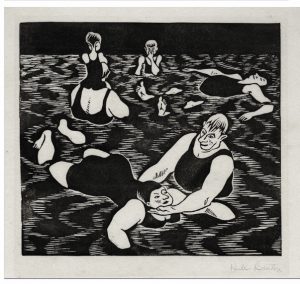 Helen, normally taking the lead in large commissions, [6] collaborated with another artist on mosaic murals with themes of music, sculpture and dance on the exterior of the powerhouse building at UC-Berkeley. The sisters also created terra cotta reliefs for the Fresno, CA, Post Office in 1941, that exists today as offices for the local school district. The largest Bruton commission was the Peacemakers mural, measuring 144’ x 57’ for the Pacifica Court of the Golden Gate Exposition that opened in San Francisco in 1939. The sisters began this design in 1937, termed “one of the most ambitious murals” of the fair. [7] It illustrated the countries located on the western shore of the Pacific Ocean. As with the case with short-lived installations for world fairs, their panels were mounted on plywood, a temporary material, and were destroyed by the US Navy after World War II. The state director for WPA at the time, Beatrice Judd Ryan, described the enormity of the mural workspace that “…alone required half a city block.” [8] Later, in 1960, the three sisters executed 22 large mosaic murals and terrazzo maps of the Pacific Theater for the World War II cemetery in Manila, Philippines. [9] The designs and execution were done in California and then sent to the Philippines to be set in concrete. Margaret and Esther, and later, Margaret and Helen, traveled to Manila to see their work. [10] 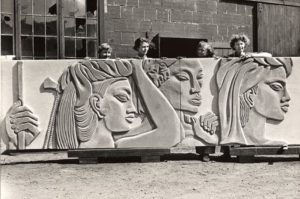 Margaret’s works are held at UC-Irvine and the Laguna Beach Art Museum, among others. Regrettably, some of her major works were destroyed in collectors’ homes in the 1991 Oakland fire. Wendy Good commented that Margaret was a brilliant and successful easel painter who won many annual prizes, often outshining her contemporary male Monterey Peninsula artists, considered icons today. In the 1940s, Margaret gave up painting altogether and began to create terrazzo [decorative material designed in a cement base] tables for a local decorator. [11] Helen remarked in 1964 that because of the production of these tables, Margaret’s work went out of favor. [12] Esther’s mosaic work at the ranch house stunned me because of its modernity and technical skill: her interior mosaic fire chamber surround and exterior house numbers and path coverings of mosaic and polished stones. As the centennial of the ratification of American women’s right to vote is celebrated this year, we happily recognize the work of the Bruton artists, “Sisters in Art.” [13] 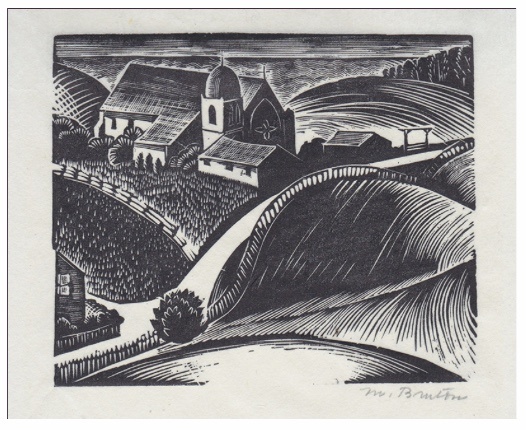