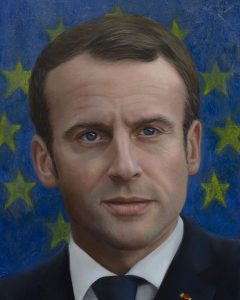 AWA Artist Shana Levenson recently had the honor of having her work featured in Time Magazine.  Here’s what she wrote about the experience:

“The Time Magazine commission was such an incredible opportunity!  Victor Williams, the magazine’s Art Director, emailed me asking if I were available to paint a portrait of a prominent figure for their year-end issue. The finished piece needed to be completed in seven days. I was actually leaving the next evening to teach a four-day workshop; only giving me three days to do the painting. I know my work ethic, and I had confidence I could do it, so I said ‘Yes!’ even though I had no idea who I’d be painting. Later that day, I was assigned to paint the President of France, Emmanuel Macron. I was nervous about choosing the right image from the five they sent me. I wanted to make sure I captured him as best I could.  Victor also asked me to incorporate my personal background texture and patterning, so that’s what I did!  Since Emmanuel Macron is the head of the EU, I painted the background blue with yellow stars; the European flag. I feel like I was able to successfully capture the leader of France without having met him in person and I still can’t believe I have a painting in the Person of the Year issue of Time Magazine, one of their biggest issues of the year!”